Women on the Line 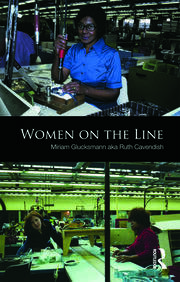 Women on the Line

Women on the Line is a pioneering ethnographic classic of the world of work in a British motor components factory. Miriam Glucksmann (aka Ruth Cavendish), a well-known contributor to the study of gender, work and employment, is for the first time revealed as the author, along with the identity of the company, product and factory.

Recording the experience of migrant women from Ireland, the Caribbean, and the Indian subcontinent with the immediacy of a diary, this is a unique account from an observing participant of the daily routines of repetitive work, a strike led by women from below, and the temporalities of work, home, children and leisure. Glucksmann's vivid narrative of life on the assembly line is combined with an analysis of the intersections of gender, ethnicity and class that prefigures subsequent theoretical advances.

This edition contains a new introduction situating the book in contemporary debates and developments and includes original photographs taken on the shop floor at the time.

Miriam Glucksmann is Professor of Sociology at the University of Essex. She has made a major contribution to the understanding of work, employment and gender, and the connections between different forms of labour. Women on the Line was her first research-based book in this area, followed by Women Assemble (1990), Cottons and Casuals (2000), and the jointly-edited A New Sociology of Work? (2005). She has held many research fellowships and visiting professorships at home and abroad, and is a Fellow of the British Academy. As an ESRC Professorial Fellow she recently completed a three year research programme on ‘Transformations of Work: New Frontiers, Shifting Boundaries, Changing Temporalities’.

'Even after nearly thirty years, this account of women's factory lives, their juggling of work/life responsibilities, and view of the world from the bottom up, has an immediacy of the present. The new introduction reveals hidden truths and brings the political issues of the time to bear on those of today.'

'Miriam Glucksmann casts her experienced eye over three decades of political engagement, work transformation, and research regimes with their new ways of seeing and thinking. Revisiting her classic study of women on the line, she shows just how much sociology has changed in step with, but also independently of, the world it seeks to comprehend. What better way of studying history than to reflect back on a great ethnography, what better way of studying the potentialities of the present than against such a concrete lived experience of the past. A pioneering revisit to a pioneering ethnography!'

'This is one of the great ethnographies of industrial society, a work of bitter realism and careful thought.  In vivid detail, it catches the almost feudal hierarchies in factory life, and the solidarity and divisions among working women.  It analyzes the work/life problem in its starkest form, and the reasons change and social justice get stalled.'
—Raewyn Connell, University of Sydney, Australia

'Women on the Line is a wonderful participant observation study of women workers in a London factory in the 1970s. When published, it was highly acclaimed. Today, republished with a new introduction, it is time to pronounce it a classic in economic sociology, the sociology of gender and a few other genres as well.'
—Richard Swedberg, Cornell University, USA

This book packs more insight per page than any other case study I've read, and gives the sense of the factory so well you can see it and smell it. The author's added reflections on changes in the economy, industry and neighbourhood since the fieldwork was done enrich the picture immeasurably. In her new reflections, Glucksmann places the story of a particular factory at a particular historical moment in a broader perspective which is rich in evocative detail about the place and time, weaving the theoretical material into the story in a way that enhances the reader's ability to see the big picture of social change. Women on the Line remains the gold standard for an empathetic but unromantic account of gender relations, and a cure for a-historical nostalgia.

'A welcome reissue of a classic feminist ethnography of work, with a fascinating new author’s introduction, which should win a new readership. Glucksmann’s focus on what would now be known as ‘intersections’ of gender, class and ethnicity explodes the myth that 1970s and 80s feminism was insensitive to diversity.'

'Although written over two decades ago from the perspectives of socialist feminism and political economy, Women on the Line remains one of the most inspiring pieces of research on gender and working class women. Here you find in great detail issues that are now top of the agenda - gender and the body, emotion, time and space, as well as technology. The book demonstrated so clearly how all these were embedded in gendered social structure and capitalist organization. Written in a lucid style, the stories of these working women truly come to life.'

'It is wonderful news for Japanese readers that Miriam Glucksmann’s landmark work is being republished. Women on the Line was remarkably distinctive as an outstanding ethnography, developing a clear analysis of working class female factory workers with such a lively touch. The author’s incisive analysis has a compelling force that reaches beyond time-space constraints. This edition will renew the attention of Japanese readers to a monumental study of women and labour.'

'Re-reading Women on the Line is like stepping back into another time: of women's industrial employment, trade union organizing, an active women's movement. And yet, its re-publication could not be more welcome as in the intervening years, participatory studies of employment have expanded exponentially. The reissue provides the opportunity for a fascinating re-examination of some of the most difficult issues that face researchers: how to gain access to people and places, whether to identify the firm, the product, the place, the workers and, in this case, the author herself. It also presciently reveals the importance of the connections between class, gender and ethnicity in the workplace that have become a central concern of feminist analyses of women's lives. Finally we can all openly acknowledge Miriam Glucksmann's achievement.'

'As a classic ethnographic study of women workers on the assembly line, Miriam Glucksmann’s Women on the Line is a terrific work from which I learnt about politically engaged feminism and contemporary social debates on gender and class. It provides tremendous insights for my own study of Chinese women workers at the context of socialist transformation and global capitalism.'