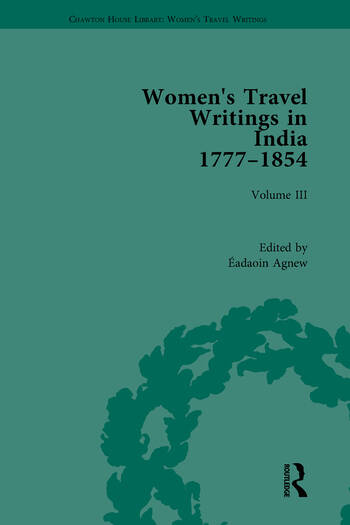 The ‘memsahibs’ of the British Raj in India are well-known figures today, frequently depicted in fiction, TV and film. In recent years, they have also become the focus of extensive scholarship. Less familiar to both academics and the general public, however, are the eighteenth- and early nineteenth-century precursors to the memsahibs of the Victorian and Edwardian era. Yet British women also visited and resided in India in this earlier period, witnessing first-hand the tumultuous, expansionist decades in which the East India Company established British control over the subcontinent. Some of these travellers produced highly regarded accounts of their experiences, thereby inaugurating a rich tradition of women’s travel writing about India. In the process, they not only reported events and developments in the subcontinent, they also contributed to them, helping to shape opinion and policy on issues such as colonial rule, religion, and social reform.

This new set in the Chawton House Library Women’s Travel Writing series assembles seven of these accounts, six by British authors (Jemima Kindersley, Maria Graham, Eliza Fay, Ann Deane, Julia Maitland and Mary Sherwood) and one by an American (Harriet Newell). Their narratives – here reproduced for the first time in reset scholarly editions – were published between 1777 and 1854, and recount journeys undertaken in India, or periods of residence there, between the 1760s and the 1830s. Collectively they showcase the range of women’s interests and activities in India, and also the variety of narrative forms, voices and personae available to them as travel writers. Some stand squarely in the tradition of Enlightenment ethnography; others show the growing influence of Evangelical beliefs. But all disrupt any lingering stereotypes about women’s passivity, reticence and lack of public agency in this period, when colonial women were not yet as sequestered and debarred from cross-cultural contact as they would later be during the Raj. Their narratives are consequently a useful resource to students and researchers across multiple fields and disciplines, including women’s writing, travel writing, colonial and postcolonial studies, the history of women’s educational and missionary work, and Romantic-era and nineteenth-century literature.

This volume includes two texts, Ann Deane, A Tour Through the Upper Provinces of Hindostan (1823) and Julia Maitland, Letters from Madras (1846).

Ann Deane, A Tour Through the Upper Provinces of Hindostan (1823)