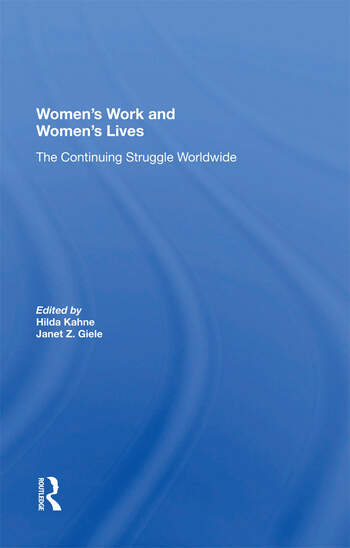 This book is a provocative analysis of the nature of the relation between women and paid work in both modernizing and industrial countries. It explores the variables that shape the relationship: demographic factors, the social and cultural context, and the direction of economic development.

Part 1: Overview 1. Promise and Disappointment of the Modern Era: Equality for Women 2. Women's Work, Women's Lives: A Comparative Economic Perspective Part 2: Modernizing Regions 3. Caught in the Crisis: Women in the Economies of Sub-Saharan Africa 4. Development and Changing Gender Roles in Latin America and the Caribbean 5. Women, Employment, and Social Change in the Middle East and North Africa Part 3: Socialist Economies in Transition 6. Women and Work in Communist and Post-Communist Central and Eastern Europe 7. The Interaction of Women's Work and Family Roles in the Former USSR Part 4: Industrial Economies 8. Women's Labor Market Experience in the Two Germanies 9. Politics, Progress, and Compromise: Women's Work and Lives in Great Britain 10. Central in the Family and Marginal in the Work Force: Women's Place in Japanese Society 11. Women and the Welfare State in the Nordic Countries 12. Work-Family Policies in the United States Part 5: Conclusion 13. Progress or Stalemate? A Cross-National Comparison of Women's Status and Roles