Words of Power
A Feminist Reading of the History of Logic 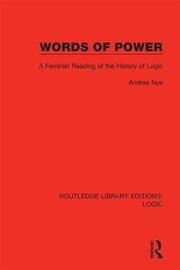 Words of Power: A Feminist Reading of the History of Logic

Originally published in 1990. A common complaint of philosophers, and men in general, has been that women are illogical. On the other hand, rationality, defined as the ability to follow logical argument, is often claimed to be a defining characteristic of man. Andrea Nye undermines assumptions such as: logic is unitary, logic is independent of concrete human relations, logic transcends historical circumstances as well as gender. In a series of studies of the logics of historical figures Parmenides, Plato, Aristotle, Zeno, Abelard, Ockham, and Frege she traces the changing interrelationships between logical innovation and oppressive speech strategies, showing that logic is not transcendent truth but abstract forms of language spoken by men, whether Greek ruling citizens, imperial administrators, church officials, or scientists. She relates logical techniques, such as logical division, syllogisms, and truth functions, to ways in which those with power speak to and about those subject to them. She shows, in the specific historical settings of Ancient and Hellenistic Greece, medieval Europe, and Germany between the World Wars, how logicians reworked language so that dialogue and reciprocity are impossible and one speaker is forced to accept the words of another.

In the personal, as well as confrontative style of her readings, Nye points the way to another power in the words of women that might break into and challenge rational discourses that have structured Western thought and practice.

Prologue. Introduction: Reading Logic  Part 1: Classical Logic  1. The Desire of Logic: Parmenides’s Passion  2. Weaving the Seine of Logos: Plato and the Sophist  3. Aristotle’s Syllogisms  4. Logos Spermatikos: The Logic of Empire  Part 2: Medieval Logic  5. An Arsenal of Reasons: Abelard’s Dialectic  6. The Antinomies of Power: Ockham’s Razor  Part 3: Reading Frege  7. Breaking the Power of the Word  8. The Marriage of Mathematics and Language  9. Frege’s Thoughts  10. A Thought like a Hammer: The Logic of Totalitarianism.  Conclusion: Words of Power and the Power of Words