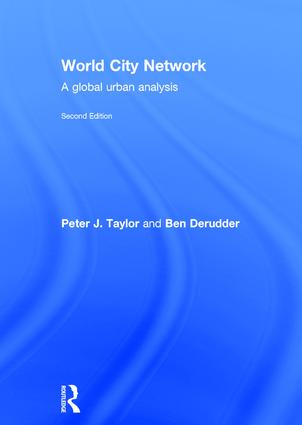 With the advent of multinational corporations, the traditional urban service function has 'gone global'. In order to provide services to globalizing corporate clients, the offices of major financial and business service firms across the world have generated networks of work. It is the myriad of flows between office towers in different metropolitan centres that has produced a world city network.

Taylor and Derudder's unique and illuminating book provides both an update and a substantial revision of the first edition that was published in 2004. It provides a comprehensive and systematic description and analysis of the world city network as the 'skeleton' upon which contemporary globalization has been built. Through an analysis of the intra-company flows of 175 leading global service firms across 526 cities in 2012, this book assesses cities in terms of their overall network connectivity, the regional configurations they form, and their changing position in the period 2000-12. Results are used to reflect on cities and city/state relations in the context of the global ecological and economic crisis.

Written by two of the foremost authorities on the subject, this book provides a much-needed mapping of the connecting relationships between world cities, and will be a valuable resource for students of urban studies, geography, sociology and planning.

Peter J. Taylor is Professor of Human Geography in the Faculty of Engineering and Environment at Northumbria University in Newcastle upon Tyne, UK. A Fellow of the British Academy, he has published approximately 450 books and articles and has been translated into more than 20 languages. He has been awarded honorary doctorates by the Universities of Ghent and Oulu. As the ‘inventor’ of the world city network approach to understanding contemporary globalization, he has been the key figure in this literature.

Ben Derudder is Professor of Human Geography in the Faculty of Sciences at Ghent University, Belgium. He has (co-)edited 4 books on world city network-formation, and published several scientific papers on this topic in key academic journals. As a key contributor to the ‘mini-literature’ on world city networks, he has been a major figure in much of the post-2000 data collection and analyses.