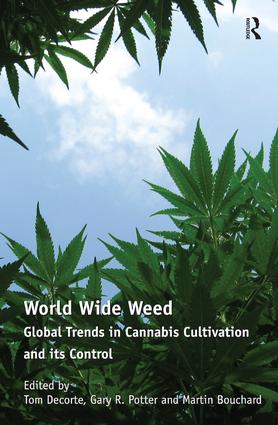 Global Trends in Cannabis Cultivation and its Control, 1st Edition

For the majority of its history, the cultivation of cannabis did not stand out, at least compared to the cultivation of other illegal plants. Cannabis plantations, like coca bush or opium poppy plantations, were typically large in size, grown by local farmers in a handful of developing (producing) countries, processed and then exported to industrial (consuming) nations. While cocaine and heroin are still produced in a handful of developing countries, cannabis cultivation is increasingly universal. From Europe to the Americas and Oceania, import substitution in cannabis markets has been noticed in almost every developed country around the world, with a notable aversion for discrimination. Geographical, technological, cultural and economic factors help to explain why (indoor and outdoor) domestic cultivation is well established, and why the nature and extent of cultivation varies so dramatically across the western, developed nations. As we start the second decade of the 21st century, the new cannabis industry continues to fascinate both casual and academic observers of the drug scene. Researchers around the world have become increasingly interested in the phenomenon, aiming to describe, and potentially explain, the rapid switch from importation to domestic production in their own countries. In bringing together some of the world's leading experts on cannabis cultivation this book contains sixteen chapters that take an interdisciplinary look at global trends in cannabis cultivation. It will serve as an exemplar for wider discussions of key theories and concepts relating to the spread not just of cannabis cultivation, but also of illegal markets more generally, the actors that operate within these markets and the policies and practices that are employed in response to developments within these markets.

’World Wide Weed is a book for the specialist reader, more academic in tone than Weed Need & Greed, and a valuable resource with a wealth of information and sources for the serious researcher. However, the book is still accessible enough for the more general reader with an interest in the practices and policy issues involved in cannabis cultivation around the world.’ Druglink '… the book’s content is stimulating and prescient… Overall, this is a stimulating book but also one which highlights how far there is still to go before those behind the global cultivation of cannabis and its control are properly understood and fully brought to account.' Global Crime ’This highly ambitious book makes a valuable contribution to disentangling the issue of cannabis cultivation and consumption as worldwide phenomenon… this book provides much food for thought, and represents a strong initial step towards exploring and tackling an issue that is of such complexity. The book is valuable reading for individuals involved in examining cannabis cultivation and supply from social, economical and political perspectives.’ Drug and Alcohol Review