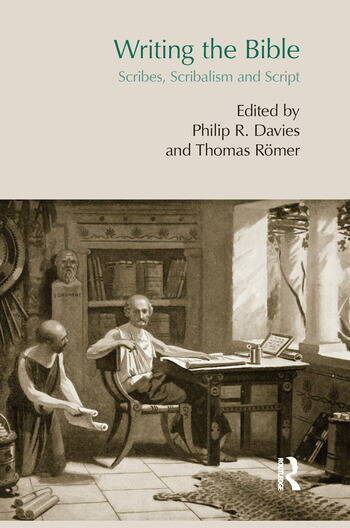 For many years it has been recognized that the key to explaining the production of the Bible lies in understanding the profession, the practice and the mentality of scribes in the ancient Near East, classical Greece and the Greco-Roman world. In many ways, however, the production of the Jewish literary canon, while reflecting wider practice, constitutes an exception because of its religious function as the written "word of God", leading in turn to the veneration of scrolls as sacred and even cultic objects in themselves. "Writing the Bible" brings together the wide-ranging study of all major aspects of ancient writing and writers. The essays cover the dissemination of texts, book and canon formation, and the social and political effects of writing and of textual knowledge. Central issues discussed include the status of the scribe, the nature of 'authorship', the relationship between copying and redacting, and the relative status of oral and written knowledge. The writers examined include Ilimilku of Ugarit, the scribes of ancient Greece, Ben Sira, Galen, Origen and the author of Pseudo-Clement.

1. Introduction, Thomas Romer and Philip R. Davies Part I Writing in the Ancient World 2. Ilimilku of Ugarit: Copyist or Creator? Adrian Curtis 3. Memory, Writing, Authority. The Place of the Scribe in Greek Polytheistic Practice (6th - 4th c. BCE), Dominique Jaillard Part II Hebrew Bible and Early Judaism 4. The Dissemination of Written Texts, Philip R. Davies 5. Genesis: A Composition for Construing a Homeland of the Imagination for Elite Scribal Circles or for Educating the Illiterate? Diana V. Edelman 6. The 'Prophets' as Scriptural Collection and Scriptural Prophecy during the Second Temple Period, Christophe Nihan 7. From Prophet to Scribe: Jeremiah, Huldah and the Invention of the Book, Thomas Romer 8. Instituting through Writing : The letters of Mordecai in Esther 9:20 - 28, Jean-Daniel Macchi 9. The Scribe and his Class: Ben Sira on Rich and Poor, Walter J. Houston Part III Early Judaism and Early Christianity 10. Some Scribal Features of the Thematic Commentaries from Qumran, George J. Brooke 11. Efficacious Writing. The Inscription of the Rosette on the High Priest's Forehead and the Egyptian Reception of Exodus 28, Charlotte Touati 12. The Prose Writer and the Cultures of Author and Scribes: The Examples of Galen and the Anonymous Author of Luke-Acts, Claire Clivaz 13. Peter and His Secretary in Pseudo-Clement, F. Amsler 14. On the Danger of Writing According to Origen, Eric Junod

Philip R. Davies is Emeritus Professor of Biblical Studies at the University of Sheffield.