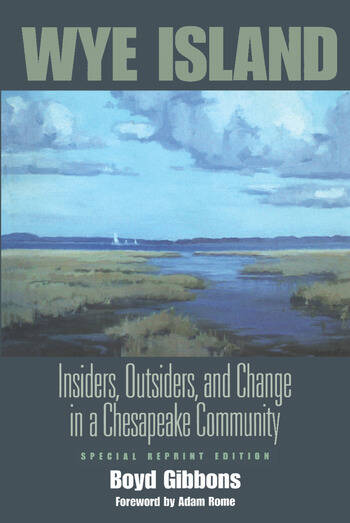 Today, most of the 2,800 tranquil acres that make up Wye Island are managed by the Maryland Park Service. However, from 1973 to 1974, the island was the site of a raging controversy. A major developer, James Rouse, wanted to build a compact waterfront village that would be surrounded by large estates, protected farms, and wetlands. A boyhood resident of nearby Easton, Maryland, Rouse hoped that the island could avoid the sprawl of unplanned subdivisions that were marring so many other places along the Eastern Shore. Combining history, journalism, character sketches, and sharp sociological insight, Boyd Gibbons presents the conflict over Wye Island in its multiple dimensions - as an example of the emerging community-based activism of the 1960s and 70s, and of a community that, while exercising its right to preserve its identity, denies opportunities for its members to improve their lives through change. In fact, Wye Island proves not to be the environmental David-Goliath struggle that might be expected. For one thing, residents opposed a development plan that can be regarded as an early model for 'smart growth.' And many were no more favorably disposed to a park or preserve than to a planned village. Their interest was in protecting the community from an invasion of immigrants from ethnically diverse Baltimore and Washington, and, where the wealthy were concerned, protecting some very private views of the water. In the end, rich landowners, poor 'natives,' and many recent newcomers opposed the Rouse project - distrusting change, and, above all, fearing 'outsiders.' The special reprint of Wye Island includes a new foreword by distinguished environmental historian Adam Rome, who explores the enduring themes of Wye Island in context of the current debates about land use, development, and sprawl.

Boyd Gibbons was president of the Johnson Foundation from 1997 to 2006. He was formerly the director of the California Department of Fish and Game, a senior journalist for National Geographic magazine, Secretary to the President‘s Council on Environmental Quality, and Deputy Under Secretary of the Interior in the Nixon Administration. The original edition of Wye Island won the American Library Association‘s Award as one of the 'Ten Most Notable Books in 1977.' Adam Rome is an associate professor of history at Pennsylvania State University, and author of The Bulldozer in the Countryside: Suburban Sprawl and the Rise of American Environmentalism.

'Gibbons‘s book moves with the grace of a novel.' Business Week 'Should be read by those who care about the future of our communities.' Library Journal 'Wye Island is primarily about people: clammers, crabbers, business executives, storekeepers, land speculators . . . .Gibbons succeeds in portraying the fear shared by the local citizens - and by implication, most Americans - of change.' Smithsonian