Yearning for the Impossible
The Surprising Truths of Mathematics, Second Edition 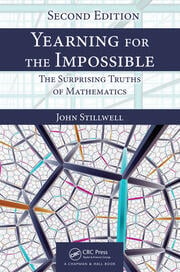 Yearning for the Impossible: The Surprising Truths of Mathematics, Second Edition

Yearning for the Impossible: The Surprising Truth of Mathematics, Second Edition explores the history of mathematics from the perspective of the creative tension between common sense and the "impossible" as the author follows the discovery or invention of new concepts that have marked mathematical progress. The author puts these creations into a broader context involving related "impossibilities" from art, literature, philosophy, and physics. This new edition contains many new exercises and commentaries, clearly discussing a wide range of challenging subjects.

John Stillwell was born in Melbourne, Australia. From 1970 to 2001 he taught at Monash University in Melbourne, and since 2002 he has been Professor of Mathematics at the University of San Francisco. He has been an invited speaker at several international conferences, including the International Congress of Mathematicians in Zurich, 1994. His works cover a wide spectrum of mathematics, from translations of classics by Dirichlet, Dedekind, Poincare, and Dehn to books on algebra, geometry, topology, number theory, and their history. For his expository writing, he was awarded the Chauvenet Prize of the Mathematical Association of America in 2005, and the AJCU National Book Award in 2009.

John Stillwell has found a thread that runs through all of mathematical creativity – an openness to dangerous mathematical ideas that once seemed irrational, imaginary, or paradoxical, and a yearning to bring them into the fold. With clear writing and marvelously original insights, Stillwell conveys the soul of mathematics as well as anyone ever has.

—Steven Strogatz, Cornell University, and author of The Joy of x

For example, in the "rational" number line, the square root of 2 is missing. Where it ought to be, we just find a gap. So the German mathematician Dedekind proposed simply decreeing that this very gap IS the square root that we are looking for! Creating the impossible.

The history of the calculus is inseparable from the concept of the infinitesimal. Mathematicians used it successfully for centuries, even while well aware that its definition is self-contradictory.

For thousands of years, mathematicians agreed that Euclid's fifth postulate is true, although they all found it impossible to prove that "fact." Then a mathematician in Germany, and another one in Russia, and another one in Hungary within a few years all discovered that the unsuccessful attempts to "prove" Euclid's postulate were actually revealing a new "non-Euclidean" geometry where it is falsified! Creating the impossible.

Stillwell goes beyond retelling these familiar examples of "yearning for impossibility". In algebra, the German mathematician Kummer, determined somehow to force algebraic numbers to behave as he knew they OUGHT TO behave, identified a new substitute for a number, a set which he called "the ideal." It does the job that for the known numbers was "impossible."

An easy, readable chapter on projective geometry, creates another kind of impossible. The point at infinity is dragged into a finite position, and the horizon, that infinitely distant circle, is merely a line at infinity.

Praise for the previous edition:

Like the White Queen in Lewis Carroll's Through the Looking-Glass, mathematicians are called upon to believe in things that, at first glance, defy common sense and appear impossible. . . . As Stillwell puts it, 'Mathematics is a story of close encounters with the impossible because all its great discoveries are close to the impossible.'
—Ivars Peterson, Science News , July 2006

Stillwell weaves historical details into his writing seamlessly, helping to give the reader the true feeling that mathematics is more than just a bunch of people playing games with symbols, but rather a rich and rewarding intellectual endeavor important to the human enterprise.
—Marcus E. Barnes, MAA Reviews, August 2006

Yearning for the Impossible is as much of a celebration of the greater understanding mathematics has brought to the world as it is a history and discussion of innovative concepts. and is highly recommended for library and personal reading shelves.
—Wisconsin Bookwatch, August 2006

Rises nobly to the challenge of describing these topics to a genuine novice...There is much to admire in Stillwell's attempt... he's accomplishing something very important and difficult here in demonstrating that there's some real struggle present in the process of mathematical discovery.
—Daniel Biss, Notices, June 2007

Yearning for the Impossible offers a fascinating, historical look at some popular mathematical concepts used in music, art and philosophy. . . This book is an interesting find and provides a readable approach to some higher-level mathematics. The chapters can be read independently, and the reader can dig deeper into textbooks and history books for additional problems and details. I give a high recommendation for this book!
—Lynn Godshall, Convergence Magazine (MAA), June 2007

A wonderful journey through mathematical discoveries... this book is an excellent vehicle for giving mathematics students new research ideas and, most important, for planting the seed in their minds to 'yearn for the impossible' as they investigate new truths.
—Mathematics Teacher, August 2007

Stillwell has achieved what many might well have come to believe to be nearly impossible in mathematical exposition for the masses...[he] succeeds, in every topic treated, in bringing a fresh eye to questions even mathematicians might think have been mined in the past to boring exhaustion [and] shows there is still a lot of gold to be found, if one only thinks about things in a new way. Stillwell brings new, unorthodox insights to his writing that will stimulate readers (from high schoolers to emeritus professors) to think about old topics in new, nonstale ways... Yearning for the Impossible will be a treat for teachers, too, who are looking for new ways to bring stimulating, fresh examples into their courses.
—SIAM Review, May 2007

Stillwell does an excellent job laying the historical foundations for these discoveries; he is to be commended for his historical accuracy.
—Recreational Math, March 2007

Mathematics may be described as a story of close encounters with the impossible because all great discoveries are close to the impossible. The aim of this book is to tell this story, briefly and with few prerequisites, by presenting some representative encounters across the breadth of mathematics.
—CMS Notes, May 2007

This book explores history through a lens focused on the creative tension between common sense and the 'impossible' . . . Drawing connections to art, literature, philosophy, and physics, this book examines the place of mathematics in our intellectual landscape.
—L'Enseignement Mathématique, January 2006