Yes We Can?
White Racial Framing and the Obama Presidency 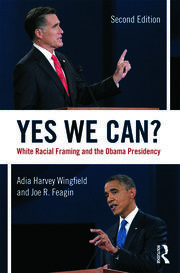 Yes We Can?: White Racial Framing and the Obama Presidency

The first edition of this book offered one of the first social science analyses of Barack Obama’s historic electoral campaigns and early presidency. In this second edition the authors extend that analysis to Obama’s service in the presidency and to his second campaign to hold that presidency. Elaborating on the concept of the white racial frame, Harvey Wingfield and Feagin assess in detail the ways white racial framing was deployed by the principal characters in the electoral campaigns and during Obama’s presidency. With much relevant data, this book counters many commonsense assumptions about U.S. racial matters, politics, and institutions, particularly the notion that Obama’s presidency ushered in a major post-racial era. Readers will find this fully revised and updated book distinctively valuable because it relies on sound social science analysis to assess numerous events and aspects of this historic campaign.

Chapter 3 From Susan B. Anthony to Hillary

Chapter 4 The Cool Black Man vs. The Fist-Bumping

Chapter 6 The 2008 Primaries and Voters of Color

Adia Harvey Wingfield is an associate professor of sociology at Georgia State University. Her research focuses on the ways intersections of race and gender shape various groups’ experiences in different occupations. Her recent work addresses the experiences of black male nurses, minority faculty at independent schools, and black female entrepreneurs.

Joe R. Feagin is Ella C. McFadden Professor at Texas A&M University. Feagin has done research on racism and sexism issues for 48 years and has served as the Scholar-in-Residence at the U.S. Commission on Civil Rights. He has written many scholarly books and articles in his major research areas, and one book (Ghetto Revolts) has been nominated for a Pulitzer Prize. He was the 1999-2000 president of the American Sociological Association.

"Anyone who believes that race no longer plays an important role in politics or social life should read this book. Impatient liberals who think that Obama should be doing more should read it as well. Full of rich detail and astute interpretation, Yes We Can? shows how systemic racism limits black hopes and fans white fears."

"In this timely book, Harvey Wingfield and Feagin provide a novel perspective on the Obama presidency. They portray Obama as walking a tightrope between opposing tropes. Since even one misstep could result in Obama’s downfall, Harvey Wingfield and Feagin show how this balancing act has allowed Obama to survive politically, but constrained him from delivering on his promise of hope and change."

"No sociological analysis of the Obama era is as thoroughgoing or trenchant. By conceptualizing systemic racism's soft and hard racial framing, Harvey Wingfield and Feagin elucidate the complex and often contradictory embrace of a post-racial hegemony by the history-making man and the country who would call him to lead. From everything to the Democratic primary to the Administration to the rare and crucial analysis of the Asian Pacific American and [email protected] electorate, the authors demonstrate how decidedly non-post-racial America remains. Indispensable for anyone studying race in the 21st century."

"Harvey Wingfield and Feagin gave us one of the clearest analyses of the election of Barack Hussein Obama II as the 44th President of the United States. Their work, embedded within the Feagin-founded theoretical schema The White Racial Frame, enabled them to share an insight largely ignored by those who were confusing the end of racism with the true meaning of Obama’s presidency and the coming of a ‘post-racial America.’ The second edition of the book is welcome indeed as it takes the analysis further, underscoring, if you will, their predictions made in 2010."

"This groundbreaking analysis of the way Barack Obama’s campaign was influenced and organized by the white racial frame convincingly refuted claims of a post-racial America after Obama’s election. Now in its second edition, Harvey Wingfield and Feagin have bolstered this powerful analysis of persistent institutional racism in America by delineating the ways in which the white racial frame affected the Obama presidency."

"Adia Harvey Wingfield and Joe Feagin have assembled a tour de force! Far from a ‘post-racial’ campaign, Yes We Can? demonstrates the racialized meanings, desires, and habits that structured the 2008 campaign. The authors expertly delve into whether the election meant the death of James Crow, Esquire or the conception of a Blackface of White Empire."