Youth On Religion
The development, negotiation and impact of faith and non-faith identity 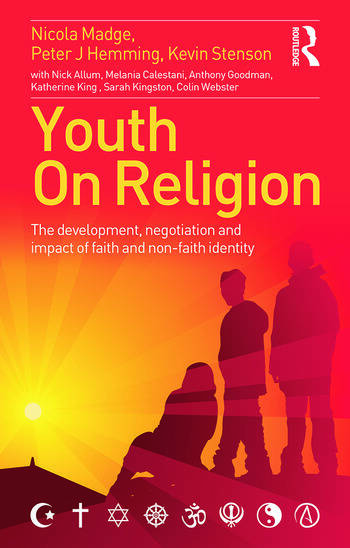 Youth On Religion: The development, negotiation and impact of faith and non-faith identity

Globalisation has led to increasing cultural and religious diversity in cities around the world. What are the implications for young people growing up in these settings? How do they develop their religious identities, and what roles do families, friends and peers, teachers, religious leaders and wider cultural influences play in the process? Furthermore, how do members of similar and different cultural and faith backgrounds get on together, and what can young people tell us about reducing conflict and promoting social solidarity amid diversity?

outlines the findings from a unique large-scale project investigating the meaning of religion to young people in three multi-faith locations. Drawing on survey data from over 10,000 young people with a range of faith positions, as well as a series of fascinating interviews, discussion groups and diary reports involving 160 adolescents, this book examines myriad aspects of their daily lives. It provides the most comprehensive account yet of the role of religion for young people growing up in contemporary, multicultural urban contexts.

is a rigorous and engaging account of developing religiosity in a changing society. It presents young people’s own perspectives on their attitudes and experiences and how they negotiate their identities. The book will be an instructive and valuable resource for psychologists, sociologists, criminologists, educationalists and anthropologists, as well as youth workers, social workers and anyone working with young people today. It will also provide essential understanding for policy makers tackling issues of multiculturalism in advanced societies.

1. Background and context. 2. The Youth On Religion Study. 3. Constructions of religion. 4. Religious journeys. 5. Religious identity and expression. 6. Religion and Everyday Life. 7. The family and its influence. 8. Friends and schools. 9. Religion and the Community. 10. The overall picture

Nicola Madge is Professor of Child Psychology in the Centre for Child and Youth Research at Brunel University, London. She is the author of a wide range of publications on children and young people’s issues that include religion, ethnicity, disability, disadvantage and self-harm. She is the Principal Investigator for the Youth On Religion study on which this book is based.

Peter J. Hemming is a lecturer at Cardiff University’s School of Social Sciences, where he teaches sociology of education and childhood studies. Peter’s research interests include children and young people, schools, power and identity, faith-based education, citizenship studies and sociology of religion. He is also a former primary school teacher.

Kevin Stenson is Honorary Professor of Criminology at the University of Kent and Visiting Professor at the London School of Economics and London Metropolitan University. His research interests include crime, policing, community safety, ethnicity, culture and religion.

'Madge (Child Psychology, Brunel Univ., UK) and her coauthors offer an actor-centric approach in this welcome addition to a timely and important topic... The book's language is theoretical, but the volume will be of interest to students specializing in the sociology of religion or sociology of youth. Summing Up: Recommended.' - Y. Nesen-Cassino, Montclair State University, in CHOICE, November 2014.

'This unique book is the result of the Youth on Religion project – a major research effort in Britain concerning the prevalence of both faith and non-faith among young British people. Youth on Religion is the only holistic examination of the entire range of beliefs (including non-belief) among contemporary British youth. The scholarship in this definitive study is outstanding, and the book is sure to have wide appeal.' - Ralph W. Hood, Jr., University of Tennessee at Chattanooga, USA

'Youth on Religion presents findings from a large-scale, mixed methods project funded in the Youth phase of the AHRC/ESRC Religion and Society Programme investigating young people's religious identities... The data are framed by classic sociological theorizing... The authors highlight the need for further research seeking teachers' parents' and communities' views as well in order to check the gap between rhetoric and reality. Such work could nuance the contrast between the West and other places drawn by participants and adopted by the team... [This] is an insightful, thorough and rich new resource on young people's religious and non-religious identites. The concluding call to listne to young people's own views on what will work in terms of Religious Education, cohesion and integration is a powerful one." - Rebecca Catto, Coventry University, UK, Sociology Journal

"YOR provides an excellent resource on a generation in transition amid a cultural context that at once provides a secularizing tendency to religiosity and an emergence of religious diversity through globalization and immigration. In this context of change, religion presents necessary community cohesion and divisive conflict." Patricia Snell Herzog, University of Arkansas, USA