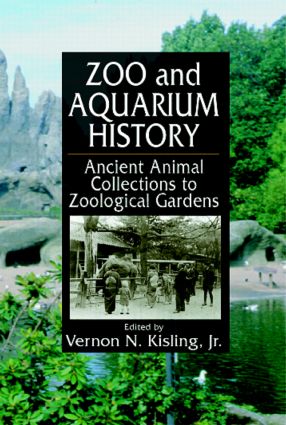 As one of the world's most popular cultural activities, wild animal collections have been attracting visitors for 5,000 years. Under the direction of Vernon N. Kisling, an expert in zoo history, an international team of authors has compiled the first comprehensive, global history of animal collections, menageries, zoos, and aquariums. Zoo and Aquarium History: Ancient Animal Collections to Zoological Gardens documents the continuum of efforts in maintaining wild animal collections from ancient civilizations through today.

Although historical research on zoos and aquariums is still at a rudimentary stage, this book pulls together regional information along with the cultural aspects of each region to provide a foundation upon which further research can be based. It presents a chronological listing of the world's zoos and aquariums and features many never-before published photographs. Sidebars present supplementary information on pertinent personalities, events, and wildlife conservation issues. As an overview of the current state of our knowledge, Zoo and Aquarium History: Ancient Animal Collections to Zoological Gardens provides an extensive, chronological introduction to the subject and highlights the published and archival resources for those who want to know more.

"… a thorough historical overview of the establishment of zoos … Vernon Kisling has done a masterful job … the writings here contain a vast amount of thought-provoking fodder. … The photographs offer a fascinating array of enclosures and situations. … A place on your bookshelf should be reserved for it …"

"I am continually reminded of the effort taken by each author, and by the editor, to set details within an understandable and fascinating context. And this context never fails to engender a respect for the zoos and aquariums of the parts, and to remind me that our work-as urgent as it often seems-is built upon the knowledge and accomplishments of the past.

"I draw considerable confidence and responsibility and determination from that reminder, and do not hesitate to recommend this fine work"

"Just got my copy of the zoo history book. It is money well spent. This is the best resource on zoo history I've ever seen. It is thoroughly researched (although I would have liked to see more on Barnum's role-my bias) well illustrated, and very readable. Since my office is reviewing giant panda applications, I dazzled the folks here with the Ruth Harkness story. I never realized that pandas had always been a coveted species for zoos. Thanks for the landmark publication! I will probably send it to you for an autograph or I'll bring it to you at the next AZA annual."

"Zoo buffs will want this book on their reference shelf."

"…clear and well-written introduction to the history of institutional captive animal collection and display, with helpful illustrations, statistical data, and reference notes…This volume will benefit students, the general public, and interested professionals."

"The editor has assembled a knowledgeable group of zoo historians from around the world to tell the story of the development of zoos an aquariums."

"Good editing makes the transition between chapters very smooth. It becomes obvious during the reading of this book that the editor and authors worked very closely to make the book cohesive (not an easy task in a multiple authored book)."

"With the finish of Chapter 11 on South American Zoos comes a nice appendix giving dates of establishment for known institutions. For zoos or aquariums where little is known the authors refer readers to additional references. A comprehensive index to this work makes this book useful to a wide range of interested users."

"Ken Kawata's chapter on zoos in Japan is nothing short of a masterpiece- an interesting insight into a zoo community that has evolved in almost total isolation from its world partners."

"Another gem is Kisling's own essay on the very roots and origins of animals in captivity which introduces the book."

"There is enough vital information to satisfy any zoo enthusiast and enough information to make it an essential reference work. It is important that every one of you support a work such as this."

"There are over 400 interesting pages, masses of references, and lists and stories in a well produced and illustrated book. The references are of particular value and use. Zoo history may not be a hugely popular subject but it is an interesting one."

"…this book is the best produced so far on this subject. I do recommend it highly. I learnt something new on practically every page. A lot of food for thought and leads to follow up."

Zoological Gardens at Surrey and Liverpool

Zoological Gardens at Whipsnade and Jersey

APPENDIX: Zoos and Aquariums of the World