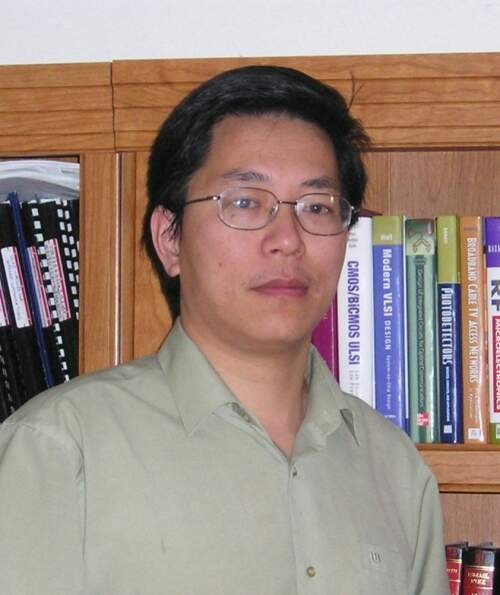 Fei Yuan is a professor in the Department of Electrical and Computer Engineering at Ryerson University, Toronto. He earned his BEng from Shandong University, Jinan, China, and his MASc and PhD from the University of Waterloo, Canada. Widely published and highly decorated, Dr. Yuan is a registered professional engineer in the province of Ontario, Canada.

Fei Yuan was born in the city of Changzhou, Jiangsu, China. He received the B.Eng. degree in Electrical Engineering from Shandong University, Jinan, China in 1985, the M.A.Sc. degree in Chemical Engineering, and Ph.D. degree in Electrical Engineering from University of Waterloo, Waterloo, Ontario, Canada in 1995 and 1999, respectively. During 1985-1989, he was a lecturer in the Department of Electrical Engineering, Changzhou Institute of Technology, Jiangsu, China and was engaged in the development of microprocessor-based instruments and process control systems. In 1989 he was a Visiting Professor at Humber College of Applied Arts and Technology, Toronto, ON, Canada, and Lambton College of Applied Arts and Technology, Sarnia, ON, Canada. He was with Paton Controls Limited, Sarnia, ON, Canada as a Controls Engineer during 1989-1994 where he designed and commissioned total distributed control systems for petrochemical, fertilizer, and food processes worldwide. He joined the Department of Electrical and Computer Engineering, Ryerson University, Toronto, Canada as an Assistant Professor in 1999 and was promoted to the rank of Associate Professor in 2003 and Full Professor in 2008. Dr. Yuan served as the Chair of Department of Electrical and Computer Engineering, Ryerson University during 2010-2015. Currently he serves as a the Director of Quality Assurance, Faculty of Engineering and Architectural Science, Ryerson University.

Dr. Yuan is the editor and a lead co-author of CMOS Time-Mode Circuits : Principles and Applications (CRC Press, in press), the author of CMOS Circuits for Passive Wireless Microsystems (Springer, New York, 2010), CMOS Active Inductors and Transformers : Principle, Implementation, and Applications (Springer, New York, 2008), CMOS Current-Mode Circuits for Data Communications (Springer, New York, 2006) and the co-author of the book Computer Methods for Analysis of Mixed-Mode Switching Circuits (Kluwer Academic, Boston, 2004, with Ajoy Opal). He is also the author / coauthor of some 200 research papers in refereed journals and conference proceedings. Dr. Yuan was awarded the Ryerson Research Chair from Ryerson University in Jan. 2005, the Research Excellence Award from the Faculty of Eng. and Architectural Science of Ryerson University in 2004, the Early Tenure from Ryerson University in 2002, the Doctoral Scholarship (PGS-B) from Natural Science and Eng. Research Council of Canada during 1997-1998, the Teaching Excellence Award from Changzhou Institute of Technology in 1988, and the Science and Technology Innovation Award from Changzhou Municipal government in 1988. Dr. Yuan is a senior member of IEEE and a registered professional engineer in the province of Ontario, Canada.