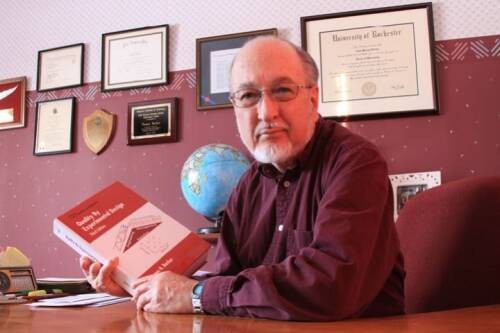 I have been designing experiments for over 50 years and teaching others this method that gets lasting results with the least expenditure of resources. My experience comes from my early days at Xerox where I designed over 2,000.

Thomas B. Barker is Professor Emeritus from the Rochester Institute of Technology. Before RIT, he was employed by Xerox as an engineer.
During his tenure at Xerox, he designed over 2,000 experiments which led to improvements in the Xerographic process. His work on the "XL-10" imaging system made this marking engine a success earning billions of dollars for Xerox.

He later joined Rochester Institute of Technology where he conducted both on-campus classes in design of Experiments as well as seminars for companies such as Ford, TRW, Welch Allyn, GM, Pella Window and Door, EG&G, and many others. His seminars were taught in the overseas countries of Australia, Great Britain, Singapore, and Canada.  He taught over 5,000 participants in these unique, practical, hands-on sessions. He developed software for DOE and also for the class exercises in these classes and seminars. This is still available on his personal web site for those wishing to practice DOE as they learn.

Tom developed a solid curriculum in Distance Learning and through his efforts, the MS program in Applied Statistics spread across the USA and into foreign countries. His YouTube DOE vignettes are available as supplements to any class in DOE.

Tom has a number of interests and has managed to integrate many of them. Photography and imaging play a central role in his activities. He has produced, written, and directed Distance Learning courseware for the MS program in Applied Statistics at RIT. His experience with both still and video photography has made these efforts possible. For six years he conducted a movie camp for his two grandsons and their friends in Amherst, MA. The kids made over 10 movies in this camp and have progressed amazingly with this communication medium. He also conducted a movie camp for a troop of Girl Scouts in his home town.
His film "The Last Drop of Oil" was an official selection in the Greentopia Film Festival in 2012.
Tom has written 5 books on Experimental Design and its applications. He has also authored a two volume Repair manual for Gilbert American Flyer electric trains which is now in its 3rd Edition. His latest movie effort is with a documentary on the history of The A. C. Gilbert Company which depicts the invention of the Erector Set and the history of American Flyer Trains. He is considered an authority on Gilbert history.
His latest book, The Legend of the Pikesville Cave is his first work of fiction. It is inspired by his Gilbert American Flyer S Gauge train collection and the three layouts in his basement. He wrote this book surrounded by his trains where he did all the photography and illustrations.
Tom lives in Webster, New York and has traveled all over the world with his wife Anne. They have a perfect sized Chinook motor home in which they travel throughout the USA.

A series on DOE