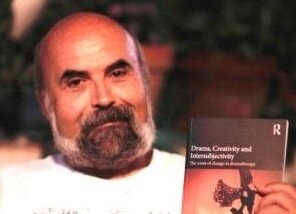 Starting from a background as an actor, playwright and puppeteer, I have been working as a dramatherapist for over twenty-five years in different fields, mainly mental health, education, and social care. In 1998 I founded the first dramatherapy training course in Italy at the “Centro ArtiTerapie”, Lecco, of which I am still teacher and scientific advisor. From 2012, I also lecture in Arts Education and Theatrical Direction at the Fine Arts Academies of Palermo and Bari, Italy.

Salvo Pitruzzella is a pioneer of dramatherapy in Italy.
Starting from a background as an actor, playwright and puppeteer, he has been working as a dramatherapist for over twenty-five years in different fields, mainly mental health, education and long-life learning, and social care.
In 1998 he founded the first dramatherapy training course in Italy at the “Centro ArtiTerapie”, Lecco (www.artiterapie.it), of which he is still teacher and scientific advisor. The centre had started in 1994, and had been gradually including four different three-years courses of the four main Arts Therapies, plus a series of interdisciplinary seminars, becoming the major training institution in Northern Italy.
From 2012, he also lectures in Arts Education and Theatrical Direction at the Fine Arts Academies of Palermo and Bari, Italy.
International Member of the BADTh (British Association of Dramatherapists), and member of the Editorial Advisory Board of Dramatherapy Journal, from 2004 onwards he has given presentations at the BADTh annual conferences, being the first Italian dramatherapist to give a keynote lecture, in Nottingham, 2016.
Honorary Member of the SPID (Società Professionale Italiana di Drammaterapia), on behalf of which he attends the Executive Committee of the EFD (European Federation of Dramatherapy), founded in 2013, which includes the professional associations of twelve European Countries. He gave the keynote lecture at the First European Conference of Dramatherapy in Athens, May 2015.
Italian Regional Representative at ECArTE (European Consortium for Arts Therapies Education), since 2013 he had been co-editor of the ECArTE publications (with Malcolm Ross, Sarah Scoble and Richard Hougham), and was one of the organizers of the 13th European Arts Therapies Conference ‘Cultural Landscapes in the Arts Therapies’ in Palermo, Italy, September 2015, where he gave a Masterclass in Drama Therapy.
He has lectured and led workshops all around Italy, as well as in UK, Israel, Switzerland, Malta, Romania, Czech Republic and Greece.