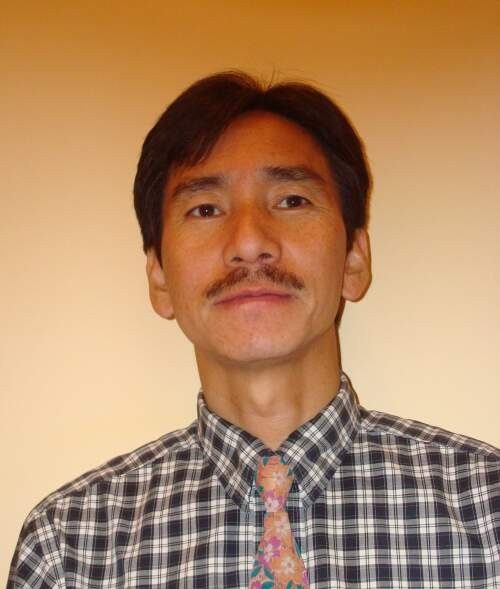 The author is an interdisciplinary expert of GIS, environmental and Earth sciences. He has worked or managed hundreds of projects across the U.S., China, Japan, Iraq, Libya, and other countries, such as the Libya chemical weapons disposal project which was reported by the New York Times on February 2, 2014, entitled “Libya’s Cache of Toxic Arms All Destroyed”. The author is also one of the early pioneers who introduced GIS technology into environmental and Earth sciences.

The author was originally trained as a geoscientist in the early 1980s. He started his career as a geologist, studying the plate tectonics of the Himalayas, Tibetan Plateau, and other related regions. With the economy booming started in the late 1980s in China, came serious air, soil, and water pollutions from mining, manufacturing, power plants, farming, transportation, burning of coal and fossil oil, over capacity or aging sewer systems, lagging regulations, monitoring, and enforcement, etc. Environmental investigations and remediation became a higher priority for the country. So, the author started to work on environmental projects, such as the air quality monitoring of the Copper Valley Gold Mine, evaluating the environmental impact of the Wei River Power Plant and designing remedial alternatives, investigating a polluted river by a paper mill, etc. For each geologic or environmental project, a large quantity of data were collected, processed, analyzed, and compiled into maps, graphics, and summary tables to help scientists, stakeholders, and decision makers to understand problems and find solutions. Most of the data collection, analyses, and mapping were done manually or semi-manually, in the 1980s. Therefore, the author tried to find better ways to automate the tedious and error-prone mapping and data analyzing tasks he was managing. After extensively research, he realized that GIS technology was the best choice to improve the efficiency of geological and environmental mapping and data collecting, processing, editing, storing, managing, sharing, analyzing, modeling, and visualizing processes. He started to learn and use GIS in the late 1980s, with very limited computing and data storage resources.

In March 1994, the author and another geologist, organized the IGCP Project 294 International Symposium in Xi’an, China, and edited a book entitled “Very Low-Grade Metamorphism: Mechanisms and Geologic Applications”, published by the Seismological Press. During this conference, the author connected with some environmental scientists and geologists in Japan and U.S., who used GIS in their studies and projects.

In early 1995, sponsored by the China Ministry of Science and Technology and Japan International Cooperation Agency, the author traveled in Japan to study some environmental sites impacted by historical mining, especially the gold mines constructed and operated after the World War II. He worked there for around half a year, and he had more access to GIS technology, especially the ESRI’s first PC version ARC/INFO.

In fall 1996, funded by his professor’s National Science Foundation (NSF) grants, the author came to U.S. as a graduate student, assisting his professor in teaching and research. Besides his geology studies, he devoted a lot of time learning GIS and computer programming. As part of this M.S. thesis, he was tasked to convert the hand drawn geology maps of a southern California and southwestern Arizona region into digital GIS data layers and maps, and then write GIS programs to read geologic measurements from tables/databases and plot them onto geology maps automatically.

At that time, GIS technology was still at its early stage of development. People had just started to learn and use it in their disciplines. On the campus, although there were plenty of GIS experts and geology professors, there was no one who knew both GIS and geology enough to help him. As an earlier pioneer to pursue these interdisciplinary approaches, he soon ran into many challenges and problems. Studying and experimenting very hard, he overcame the challenges one by one, and successfully completed the tasks. When he presented the beautiful digital GIS maps, showing colorful geologic units and structures, and measurement symbols, to his professor and students, they were so impressed with his innovative interdisciplinary approaches and the powerful GIS technology.

In April 1998, the author presented a paper entitled “Applications of GIS in Structural Geology” to the 110th Annual Conference of the Iowa Academy of Science. In late 1998, he published the details of his research and experiments in GIS and geology, along with many GIS, Visual Basic, C++, OpenGL, and virtual reality programs in his Master degree thesis of “Computer Mapping, Data Analysis, 3D Modeling, and Visualization of the Geology in the Picacho-Trigo Mountains Area of Southern California and Southwestern Arizona”. The author also published his GIS programs to an ESRI website to share with other GIS and geology users. They attracted a large number of users with many downloads, questions, and complimentary comments. His pioneering work helped his department’s students and some faculties to learn and use GIS in their geology and environmental studies and research. Besides the geology projects, the author was also selected to work, as a research assistant (RA), on a natural resource management GIS project of the U.S. National Natural Resources Inventory (NRI). His knowledge and experience in GIS was further broadened through that project.

Thanks to his papers, GIS programs, and thesis, the author received multiple job offers before he graduated. In late1998, he accepted a challenging offer from a small environmental and engineering company in New York to start up their GIS department and manage it. Under his management, GIS technology was extensively used in their environmental, geology, planning, natural/cultural resources conservation, and engineering projects.

In March 2002, the author was hired to manage a large engineering company’s GIS department, which was plagued with issues of data, mapping, software, and hardware for years. With his in-depth GIS knowledge and management experience, he successfully identified and solved all the problems, and made the GIS department operate smoothly in a short period of time. Since then, his GIS department has supported hundreds of projects in environmental, geology, transportation, utilities, natural and culture resources, planning, land management, construction, national security, disaster assessment and responses, and international humanitarian aids, with over one thousand project sites all over the U.S., its territories (e.g. Guam, Northern Mariana Islands, American Samoa, Saipan, Puerto Rico, and Virgin Islands), and other countries, such as Iraq, Libya, Kuwait, Saudi Arabia, Rwanda, Haiti, Japan, China, etc. Among them are some high profile national and international scale projects, such as the Libya chemical weapons disposal project, which attracted worldwide attention and was reported in great details by the New York Times on February 2, 2014, entitled “Libya’s Cache of Toxic Arms All Destroyed”. This project is discussed in Chapter two of this book as a case study.

In late 2013, the author was invited to a United Nations GIS conference in New York City. It was a special invitation-only GIS meeting attended by leaders and experts representing UN agencies, World Bank, national and regional governments, academia, and related industries. During the conference, the author discussed with the leaders and experts how he used GIS technology in identifying and solving environmental problems in a variety of projects worldwide. They were very impressed with his interdisciplinary and innovative GIS approaches, and encouraged him to write a book. Inspired by these worldwide leaders and experts, the author wrote this book.

Through these numerous diversified worldwide projects that the author worked and managed in his past 30-year career, he has accumulated a large amount of data, knowledge, experience, and lessons learned to write numerous papers and eventually this book. So, this book was written from the perspectives of a GIS learner/student, doer, and a senior manager, a geologist, as well as an environmental scientist. 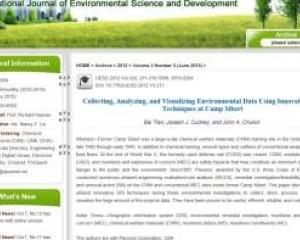 Former Camp Sibert was a large-scale chemical warfare materials (CWM) training site in the United States from late 1942 through early 1945. This paper discusses how we utilized innovative GIS techniques during these environmental investigations to collect, store, process, analyze, and visualize the large amount of the projects data. They have been proven to be useful, efficient, reliable, and cost-effective. 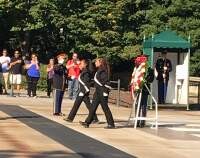 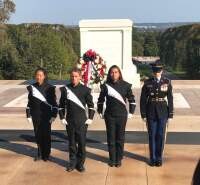 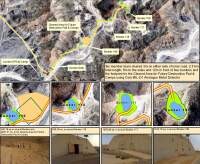 This animation was created to illustrate the changes of VOC concentrations over the 17 sampling events. It helped engineers and decision-makers to assess the plume behavior and determine future sampling and remedial options.

A 3D geology model of a project site

Some chemical weapon bunkers discovered in a desert in Libya

Some chemical weapon bunkers discover in a desert in Libya by using GIS image analysis technology.