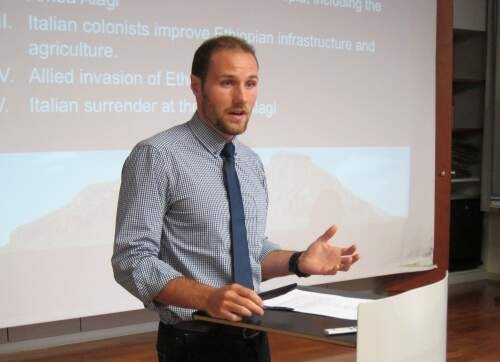 After studying Classics in the UK and Canada, I specialised in Renaissance and Early Modern Latin where I've become particularly interested in the engagement of literature with the ideas of nature and landscape.

I studied Classics in London and Calgary, Canada before beginning my doctorate in Classics, specialising in Neo-Latin literature, in 2011. I was awarded the PhD from King's College, London in 2015 and won the Elsevier Outstanding Thesis Award for my dissertation work.

As a researcher in the History of Mentalities project at the Ludwig Boltzmann Institute for Neo-Latin Studies, I have focused on the idea of nature and the environment in Neo-Latin texts, in particular the shifting aesthetic attitudes towards the mountain as an extreme locus of nature.

My current work constitutes a broadening of my engagement with nature in Early Modern Latin writing in ‘The Invention of Landscape‘ project at the Ludwig Boltzmann Institute for Neo-Latin Studies. Here I am interested not only in the development of the concept of landscape itself as evidenced in Latin literature, but also in the ideas surrounding the ‘pastoral’ in literature, as well in the individual work of key natural philosophers and historians in the late Renaissance and Early Modern Period.

I’m a keen runner and rock climber. My current position at the Ludwig Boltzmann Institute, based in the Tyrolean Alps, means that research and leisure time activities often go hand in hand!