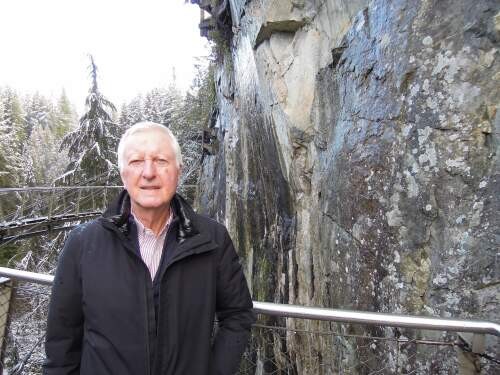 Duncan Wyllie is a Professional Engineer specializing in applied rock mechanics, on projects involving slopes, tunnels, foundations, blasting and rock fall mitigation. The industries in which he works are highways, railways, hydroelectric power generation and pipelines.

During his 50 year professional career in the field of rock engineering, Duncan Wyllie endeavored to have a diverse education, training and project experience, and to communicate this knowledge to the engineering community in a series of text books that address both theory and practice.

After being brought up in Zimbabwe, Duncan Wyllie moved to Australia where he worked at the underground lead-silver-zinc mines in Broken Hill, NSW.  This was his introduction to rock mechanics, involving stress measurement and the design for underground openings at depths of up to 1200 m.  He also worked as an underground contract miner and a surveyor.  All these activities gave him first-hand experience in both theoretical and actual rock behaviour.

He then moved was to northern British Columbia in Canada where he worked at an open pit porphyry copper mine and was responsible for both pit slope stability, and the design and construction of the tailings dam system.  This work gave him his first experience in the design of slopes and foundations, and as a bonus, an appreciation of cold weather design and construction issues.

Duncan Wyllie then joined the consulting engineering community, specializing in rock mechanics.  His initial work was in pit slope design, but gradually changed to civil engineering on railway, highway, hydroelectric and pipeline projects, mainly in the mountain ranges of western Canada, but also across North America and in countries such as Sri Lanka, Bahrain, New Zealand, Turkey, Peru and Ethiopia.

His book writing career began as a result of his company being awarded the contract to design the new access road to Mount St. Helens in Washington State after the 1980 eruption.  This project involved several bridges with foundations constructed on rock.  When he found that no text book addressed this topic, he decided to use the experience at Mt. St. Helens as the basis for the book Foundations on Rock, published in 1990 and 1999.  His other books – Rock Slope Engineering (2002 and 2017) and Rock Fall Engineering (2014) – were also written to document project experience in both design and construction, for a wide range of topographic, climatic and geologic conditions.

In addition to project work, Duncan Wyllie taught rock slope engineering for the U. S. National Highway Institute, involving about 80 courses across the United States over a period of 30 years.  He has also taught fourth year engineering courses at the University of British Columbia.

In 2010, Duncan Wyllie started a research project in rock fall mitigation that included the construction of a full-scale test facility, and the development of Attenuator nets that are highly effective rock fall protection barriers.

Travelling the world, and taking the time to study the local geology and rock engineering.