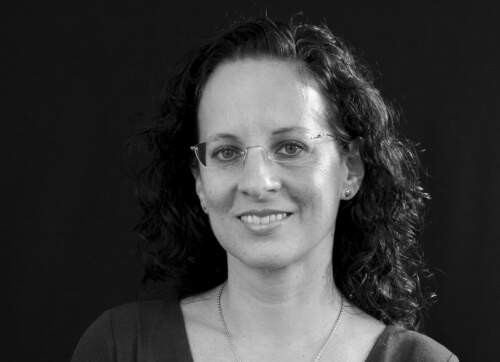 Elizabeth J. Grant teaches courses in architectural design, environmental design research, and environmental building systems. She holds a B. Arch., M.S. Arch., and Ph.D. in Architecture and Design Research from Virginia Tech. As a registered architect, her design experience includes healthcare, civic, and educational work. Her ongoing research, teaching, and outreach interests center on environmental design and building enclosures and systems, with a focus on green and reflective roofing.

Elizabeth J. Grant was born and raised in Towson, Maryland, like Elaine Benes from Seinfeld, whose hair and dancing styles she also shares. She has spent most of her adult life in Blacksburg, Virginia. She completed her Bachelor of Architecture degree at Virginia Tech in 1995 which included travel to Europe in the summer of 1994. While there, she spent a few nights at La Tourette monastery, where she first learned how to sketch what a building is, not what it looks like. The first of her designs she saw built, thanks to her fourth-year faculty, was a reception desk for a then-new exhibit at the Science Museum of Western Virginia in Roanoke.

After graduation, Elizabeth moved to Gainesville, Florida with her husband David and their cocker spaniel Duncan (named after the king in Macbeth) and cat Molson (named after the beer). She worked for Ponikvar and Associates, Inc. on hospital and clinic work for five fruitful years, finished her internship, and became a licensed architect. She moved back to Blacksburg in 2000 and has lived there ever since. Early in the new millennium, she worked for HDH Associates, P.C. in Christiansburg, Virginia, where she learned to love roof consulting. During that time she also completed a Master of Science in Architecture degree at Virginia Tech which led to two co-held patents for an omnidirectional roof vent prototype. She returned to academia full time in 2003 to pursue her Ph.D. in Architectural Design Research, which involved developing a decision support system for green roof design. After graduating in 2007, she spent two years as an adjunct faculty member, consultant to Peter Ozolins Architect, P.C., and chauffeur of a preschooler before joining the faculty of Virginia Tech’s School of Architecture + Design in 2009 as an Assistant Professor.

Over the past eight years, Elizabeth’s main teaching role has been as a design studio instructor to second through fifth year architecture students, which has included leading travel trips to sites in the United States and Europe. She also teaches environmental building systems and a graduate research methods course in which she tells master’s and doctoral students what not to do, such as not to plagiarize, not to fabricate results, and not to date anyone whose work they are grading. She also helps them put together their research proposals. Elizabeth has dirtied her hands and melted her shoes doing research on green roof storm water retention and roof reflectivity.

As an associate professor, Elizabeth plans to continue to conduct roofing research that is critical to the industry. She also wants to keep writing books and papers, presenting at conferences, and traveling. She still lives in the house she bought in 2000 that her friend Nancy described as “simple”, precisely because it is simple and she has figured out most of what is wrong with it. These days, she shares it with her husband, teenaged daughter, and a new batch of three dogs with a combined total weight of 25 pounds.

Elizabeth has conducted research in three main areas. The first study involved wind-tunnel testing of a prototypical pressure-equalizing vent for low-slope roofing systems. The second research area comprised investigation into decision-making processes in green roof design, and, later, an experimental study to determine the storm water retention patterns of differing depths of modular green roofs as they relate to weather variables. Her most recent research looked at the effects of roof reflectivity on air temperatures above roofs, as well as the effects of sunlight bouncing off of these roofs onto surrounding building elements and surfaces.

She is a registered architect in Virginia and Florida, and has worked on a range of medical, educational, and civic projects throughout her career. Her teaching is broadly centered on architectural design and more narrowly focused on the building enclosure. 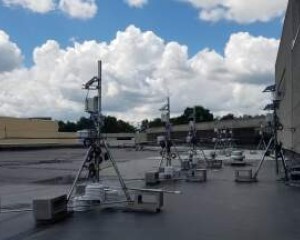 The influence of roof reflectivity on adjacent air and surface temperatures

An experimental study was conducted to answer questions about the thermal effects of roof reflectivity on the neighboring built environment. Temperatures were recorded at the surface of black ethylene propylene diene monomer (EPDM) and white thermoplastic polyolefin (TPO) membrane overlay areas; in the air and at electrical metallic tubing (EMT) above them; and at opaque and glazed wall surfaces adjacent to them. 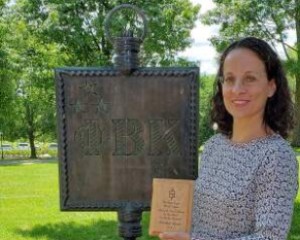 Congratulations to Elizabeth Grant for receiving the Albert L. Sturm Award for Excellence in Research from the Mu of Virginia Chapter of Phi Beta Kappa. Elizabeth receives this award by unanimous vote of the review committee for her book, “Integrating Building Performance with Design: An Architecture Student’s Guidebook.” The review committee was “impressed by the substantial research that so clearly went into the book through [her] case studies of buildings and careful blending of published secondary scholarship, professional publications, and writings of architects and philosophers.” They also found that she drew quite effectively on her own practical experience as an architect and thought she did a masterful job of integrating illustrations into her narrative.