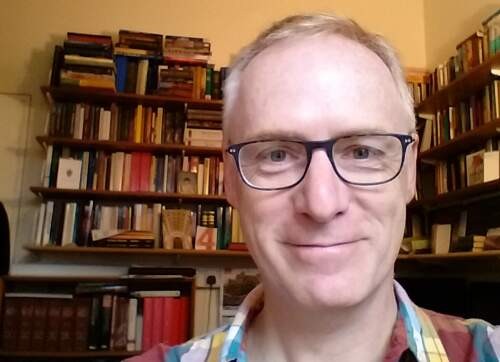 I'm a physicist who has become interested in foundational questions about the nature of science, which has led me into theology and philosophy, and the ways that science and religion relate. I run the University of Edinburgh's MSc in Science and Religion, one of the world's few advanced programmes of study in the subject.

Mark Harris is Senior Lecturer in Science and Religion at the University of Edinburgh. Trained initially in earth sciences at Cambridge, his PhD work led him into condensed matter physics, working in Oxford, then at the Rutherford Appleton Laboratory (Oxfordshire, UK), where he established his interests in the physics of magnetic materials. He is known as the discoverer (with Steve Bramwell, UCL) of 'spin ice'.

Having also studied theology at Oxford as a prelude to ordination in the Church of England, he went on to combine chaplaincy work at Oriel College, Oxford, with research and teaching in theology and biblical studies. He now combines these interests by managing the MSc in Science and Religion at Edinburgh, one of the world's few programmes of advanced study in the area.

In addition to his research interests in physics, Mark currently writes on the science-and-religion debate in its various guises.

Does science disprove the miracles of Jesus?

Creation in the Bible and in Science