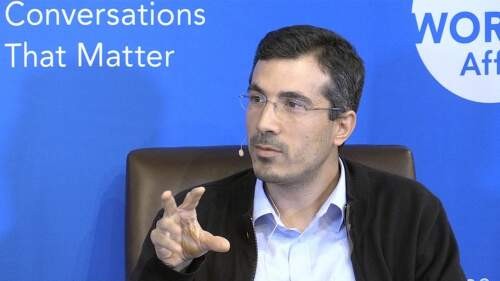 Tuğal works on politics, economic change, and religion. His first book ("Passive Revolution") studied pro-capitalist Islam and its popularization among the poor. In his second book ("The Fall of the Turkish Model"), Tuğal analyzed Islamic movements and regimes in Turkey, Egypt, Tunisia and Iran. His most recent book ("Caring for the Poor") discusses liberalism's uneasy relations with charitable ethics . He now works on populism and revolution in the contemporary world system.

Cihan Tuğal works on mobilization, socioeconomic change, and the role of religion in sociopolitical projects. His publications so far fall in four major clusters: ethnographic study of Islamic mobilization in Turkey; comparative study of Islamisms across the Middle East; revolt and revolution in the contemporary world system; ethnographic and historical research on Christian and Islamic charity.

His book Passive Revolution: Absorbing the Islamic Challenge to Capitalism was published in 2009 by Stanford University Press. Tuğal's first book, as well as a couple of his articles, is based on a two-phase ethnography of a poor and conservative district in Istanbul. He has taught in this district, and participated in its religious and political life. Situating the ethnography within the development of capitalism in Turkey, he demonstrates how Islamic movements have mobilized the poor and marginal intellectuals to later integrate them to secular, market-oriented politics. This is a process of passive revolution, whereby previously oppositional networks are absorbed into existing power structures.

Tuğal now studies Islamic mobilization in Egypt and Iran, in order to understand why similar movements have not resulted in a comparable Islamic market consensus in these countries. He argues that Islamic politics has interacted with civil society and the state in different ways in these three cases, leading to the victory of neoliberalized Islam in Turkey, its defeat in Iran, and a stalemate in Egypt (up until 2013). His collaborative work with de Leon and Desai (2009; 2015) has emphasized that political parties are central to the making of these differences. The revolutionary situation in the Middle East presents new possibilities for neoliberal Islam, as well as new impediments to its popularization, as pointed out in Tuğal’s article in Development and Change. His 2012 article in New Left Review, however, hints that the same situation has paradoxically dynamited the prospects for further Islamic liberalization within Turkey. This comparative work has culminated in Tuğal’s second major book (The Fall of the Turkish Model: How the Arab Uprisings Brought Down Islamic Liberalism), published by Verso in 2016. The book demonstrates how Turkey's interactions with corporatist and communitarian Islamisms throughout the Middle East (as well as political economic dynamics) ultimately spelled the end of the Islamic liberal era (both in Turkey and in the region as a whole).

Tuğal’s 2013 article in New Perspectives on Turkey points out that world-systemic dynamics have incited sustained mobilization not only in the Middle East, but elsewhere as well. Despite many regional and national differences, marketization and financialization (as well as decreasing American military-diplomatic effectiveness) have initiated a new era of protest. The heavy presence of middle strata in these protests puts a contradictory ideological and aesthetic stamp on today’s mass politics. Tuğal’s most recent article in Thesis Eleven traces these contradictions through comparisons of American, Turkish, Tunisian, and Egyptian cases.

Tuğal also focuses on Islamic and Christian charity, both historically and ethnographically. He traces how charitable giving has mutated over the centuries to bolster the making of the liberal subject. This transformation of charity is still open to (mostly weak) challenges, as his Polanyi-inspired article in Qualitative Sociology demonstrates. His article in Rethinking Marxism problematizes both caritas (Christian love and charity) and its Marxist dismissal. Another forthcoming article studies fields of charity in Egypt and Turkey based on a Bourdieusian critique of institutionalist theory. His work in progress explores whether charitable practices can foster alternative subjectivities anywhere in the Christian or Muslim world. Tuğal’s most recent book, Caring for the Poor (2017, Routledge), synthesizes these Polanyian, Marxian, Bourdieusian, and Foucaultian strands of his research to present more conclusive statements on charity.