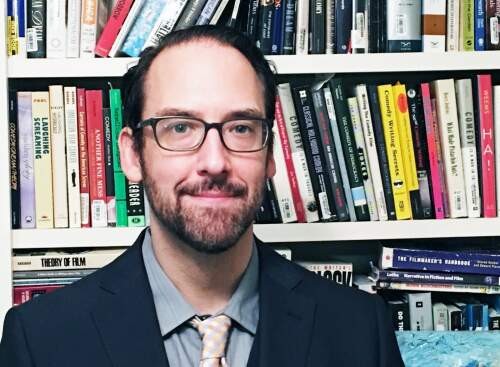 Dr Zach Sands is a scholar of media and culture with specializations in screenwriting and American Film Comedy. His first book, "Film Comedy and the American Dream," is available now. Zach holds a PhD in American Culture Studies, as well as an MA in Film and Literature and a BA in Film Production. In 2009-2010, Sands was a Fulbright Scholar in Eastern Europe.

Zach Sands grew up in rural West Michigan in the United States, but he has since lived in Chicago, Los Angeles, Southern Oregon, Northern Illinois, the Republic of Moldova, and on the island of Pohnpei in the Federated States of Micronesia. He claims that the contrasting perspectives of rural and urban life and that which he gained from having lived at both the eastern and western edges of the geopolitical West have greatly contributed to his understanding of American culture and hegemony. He presently resides in Northwest Ohio with his spouse and two children.

In addition to his advanced scholarship in media and culture, Dr Sands is also an accomplished screenwriter, musician and filmmaker. In 2006, he directed, produced and co-edited a no-budget, feature-length documentary film that was accepted to several prominent festivals; foreshadowing some of the themes in his later research, "World Famous" is an often humorous look at one man's pursuit of the American Dream. Zach's original screenplays, short films and creative writing have earned him numerous awards, and he has presented papers at academic conferences on a variety of topics. He has even written and performed standup comedy routines on multiple occasions.

In June 2017, Sands simultaneously released three full-length albums of original music: thirty-three songs that he wrote, recorded and produced while working on "Film Comedy and the American Dream." He claims that the two very different projects balanced each other out and are in some ways complementary. Some even say that if you play his music backwards, you can hear him typing.

For the first half of 2017, Zach was also working anonymously on a blog called Mr Spectator, which he conceptualized as a sort of hybrid between an online university course that he had taught on American Film Comedy and an article that he had published on a popular humor website. It has since had over seven thousand views from around the world, even without any paid advertising.