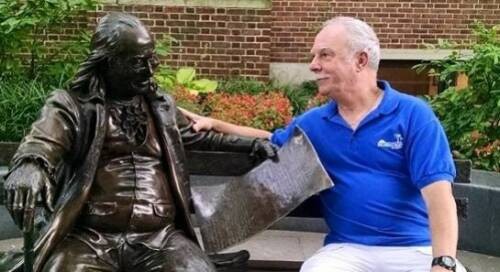 Dom Caristi, PhD, is Professor of Telecommunications at Ball State University in Indiana. He was a Fulbright professor in Slovenia in 1995 and in Greece in 2009 and has been a visiting professor in Italy with the Kentucky Institute for International Studies and AHA International. A member of the Broadcast Education Association for more than 30 years, he served on the Board of Directors (1997–2002), including a term as its Vice President.

Dom Caristi is a Professor of Telecommunications at Ball State University. Before joining Ball State in 1998, he had served on the faculty at Iowa State University, Missouri Southern State University and Saint Mary’s University of Minnesota. His main teaching and research interests are in electronic media law and policy. He is Associate Director of the Digital Policy Institute, which he helped to found in 2004. He was selected as the 2011-2012 Outstanding Faculty Member at Ball State.

Caristi’s writing is varied. In 2011 he co-authored Communication Law: Practical Applications in the Digital Age. He has contributed chapters to books, encyclopedia entries and columns in newspapers and trade journals. His commentary is valued and he has been quoted in The New York Times, Los Angeles Times, Chicago Tribune and Washington Post.

Dr. Caristi was a Fulbright Professor in Slovenia in 1995 and Greece in 2009. He serves as the Fulbright Program Adviser for Ball State. In addition to his two Fulbright experiences, he has taught American students in Italy on study abroad programs five times.