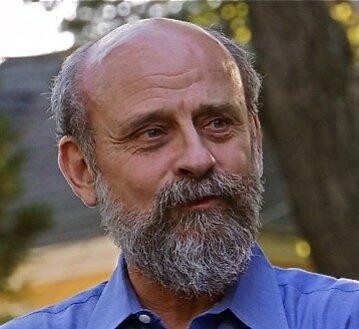 After a career in journalism, I continue to do research and writing as a professor. At Boston University, I teach classes in journalism, history, literature and other topics. I am the author of a prize-winning narrative history of US journalism titled "Covering America," as well as a prize-winning history of Southern industrialization titled "Like A Family." Earlier, I spent a decade with The AP as an editor and a political reporter and nearly as long with The Washington Post as a correspondent

CHRISTOPHER B. DALY is a prize-winning author as well as a veteran journalist, editor, scholar, lecturer, and teacher. He is a professor of journalism at Boston University, teaching courses in reporting, writing, and history.
His last book was a prize-winning history of the U.S. news media titled "Covering America."
His new book is titled "The Journalist’s Companion."
He is also a co-author of a prize-winning social history of industrialization Like a Family: The Making of a Southern Cotton Mill World.
Daly graduated from Harvard (magna cum laude) in 1976 with a degree in American History & Literature and later earned a master’s degree (with highest honors) in U.S. History from UNC-Chapel Hill.
In the 1980s, Daly worked as the Statehouse bureau chief for The Associated Press in Boston, covering government and politics, including the 1988 presidential campaign. He then served as the New England correspondent for The Washington Post (1989-1997) and has written many freelance articles and reviews for scholarly journals, newspapers, magazines, and on-line sites.
Daly also writes about journalism, journalism history, politics, and other topics at his blog, www.journalismprofessor.com.
Since 1997, Daly has taught in the Journalism Department at Boston University, one of the largest journalism programs in the country. He has also lectured widely on the history of journalism at a number of sites, including the Library of Congress, Columbia and Berkeley. 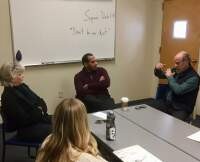 This is a talk I gave at the Columbia School of Journalism in NYC in May 2012.

Welcoming BU alum Sopan Deb of the New York Times back to campus, to talk to a group of students about using social media in reporting.

Me, looking at a painting by Sol Lewitt.