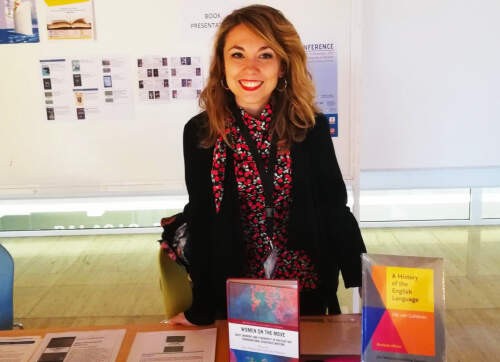 Silvia Pellicer-Ortín is Associate Professor at the Department of English and German Philology at the Faculty of Education, University of Zaragoza. Her main research interests lie in contemporary British fiction and autobiography, with a special focus on British-Jewish female literature, the ethical and traumatic component in the writings of sexual and ethnic minorities, the Holocaust and the question of Jewishness, feminism, women and gender studies, and Diaspora and Transnational Studies.

Silvia graduated in English Philology at the University of Zaragoza in June 2007, for which she was awarded the Extraordinary Degree Award. In September 2008 she obtained the Master’s degree in Textual and Cultural Studies in English, after defending with honours her MA thesis. And in March 2012 she defended with cum laude her PhD thesis (European Doctorate) entitled “Writing and Self-healing: The Representation of Trauma in Eva Figes’ Winter Journey, Konek Landing, Little Eden, Tales of Innocence and Experience, and Journey to Nowhere”, under the supervision of Prof. Susana Onega. In March 2013 she was awarded the Extraordinary PhD Award of the University of Zaragoza; in November 2013 she was offered a Marie Curie Postdoctoral Fellowship, in July 2014 she received the prestigious Burgen Scholarship Award by the Academia Euroapea and in 2015 she became an elected member of the Young Academy of Europe (http://yacadeuro.org/)

Some of her previous projects comprehend a special issue of the MLA peer-reviewed British j ournal Critical Engagements 5.1/5.2 on the writer Eva Figes (2012), a compilation of essays on Trauma Narratives and Herstory with Palgrave Macmillan, co-edited with Dr. Sonya Andermahr (2013). Her monograph saw the light in 2015: Eva Figes’ Writings: A Journey through trauma. (Cambridge Scholars Publishing). In November 2017 she published, together with Dr. María Jesús Martínez-Alfaro a collection of essays on Memory Frictions in Contemporary Literature (Palgrave Macmillan). In 2019 she co-edited, with Dr. Julia Kuznetski, a volume on Women on the Move: Body, Memory, and Femininity in Present-day Transnational Diasporic Writing

At the present moment she is going to publish the co-edition of a Special Issue, with Dr. Merve Sarikaya-Şen, entitled Literature in Vulnerable Times: Responding to Crisis for the international peer-reviewed journal European Review 29.3 (June/July 2021), and she is also co-editing another Special Issue on Beneath the Waves: Feminisms in the Transmodern Era, together with Dr. Bárbara Arizti Martín and Silvia Martínez Falquina.

Silvia’s main research interests lie in contemporary British fiction and autobiography, with a special focus on British-Jewish female literature, the ethical and traumatic component in the writings of sexual and ethnic minorities, the Holocaust and the question of Jewishness, feminism, women and gender studies, and Diaspora and Transnational Studies. She is also very interested and involved in questions concerning pedagogy and innovative teaching methods in high education, mainly in the field of foreign languages and bilingual teaching programmes. She has participated in a variety of national and international conferences delivering papers which deal with these topics, she has been invited to teach some research seminars in the Universities of Cambridge, Northampton, Birmingham, Verona, Toulouse, Barcelona, Madrid… and some of her articles have been published in scientific journals and books.