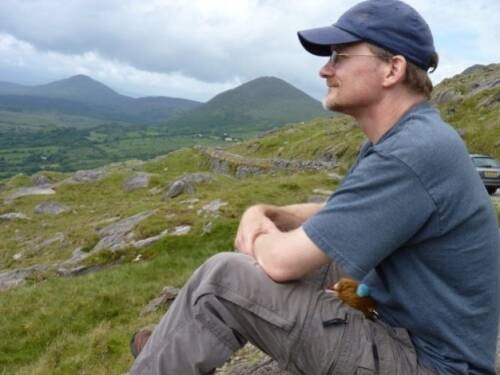 Tom Loughin is a professional, accredited Statistician (P.Stat. Statistical Society of Canada and American Statistical Association) with extensive experience in both statistical applications and methodological development. As a Professor of Statistics at Kansas State University and at Simon Fraser University, he has advised hundreds of researchers in a wide array of disciplines, including agriculture, engineering, medicine, education, and other areas.

Tom Loughin's path to becoming a statistician was laid at an early age.  When he was 8, he would take all of the different-colored marshmallows out of his Lucky Charms cereal and line them up in a bar chart by shape.  As a teen, he spent countless hours gathering baseball data from a dice-controlled APBA simulation game.

Tom pursued his interests in numbers by getting a Bachelor's degree in Mathematics with emphasis on Statistics from noted tech school Rensselaer Polytechnic Institute.  He followed this with a Master's degree in Statistics from the University of North Carolina, where he reclaimed some of his misspent youth by writing a thesis entitled "Estimating the Run-Scoring Potential of a Successful Stolen Base."  He was then hired as a Biostatistician by a small-but-growing contract research organization called Quintiles in Chapel Hill, NC.  (Tom was employee #60 when he was hired; today there are over 27,000 employees worldwide.)

After two years, Tom's love of learning and discovery began to outweigh the comfort of a weekly paycheck. He left Quintiles to pursue a PhD in Statistics at Iowa State University.  There, he worked in the student consulting lab for the Iowa State Agricultural Experiment Station.  Under the tutelage of Ken Koehler, Dave Cox, and Paul Hinz, he developed a love for statistical applications and one-on-one statistical consulting.  This experience prepared him well for his eventual first position: in 1993 he was hired onto the faculty at Kansas State University, where he held a half-time appointment with the College of Agriculture to consult and collaborate with the researchers within the college.

At K-State, Tom once again had access to excellent mentors, including George Milliken and Dallas Johnson, the authors of the “Analysis of Messy Data” series.  He spent 13 years in this position, teaching a wide range of courses, and advising hundreds of researchers in various disciplines.  Through thousands of contact hours, he learned how to communicate with subject-matter experts and students, re-expressing complex statistical concepts into language that is easy to understand.  His own research flourished as well, particularly in modeling categorical data and in experimental design and analysis.  All of his research projects focus on providing practical solutions to difficult problems.

In 2004-2005, Tom and his family spent a sabbatical leave in the greater Vancouver, Canada, area at Simon Fraser University.  In 2006 he was offered a full-time position at SFU's Department of Statistics and Actuarial Science.  He took on the role as the department's leader on the fledgling Surrey Campus of SFU, where he remained for 8 years.  As of September 2014, Tom is Professor and Chair of the Department of Statistics and Actuarial Science, stationed at the main campus in Burnaby.

He lives in Surrey, BC, Canada. His wife, Marie Loughin, is both a statistician and an author of short stories and a novel.

Tom is an avid curler, playing in two leagues at the Cloverdale Curling Club.  He is a craft beer aficionado and a member of the world's longest-running fantasy baseball league(*), the Snedecor Baseball Mail League. 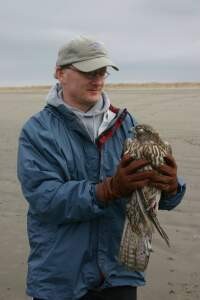 Talking with students at SFU Surrey's Open House, showcasing programs and achievements to prospective students and to the community.

From a trip in 2005 with avian ecologist and raptor specialist Dan Varland of Coastal Raptors (coastalraptors.org). This bird was captured as it attempted to feed on a bait pigeon. Its left eye was badly injured prior to capture and eventually had to be removed by an ophthalmologist. The bird (named Nike) now lives as an educational animal at Cascades Raptor Center (http://www.eraptors.org/rr_gyrfalcon.htm).