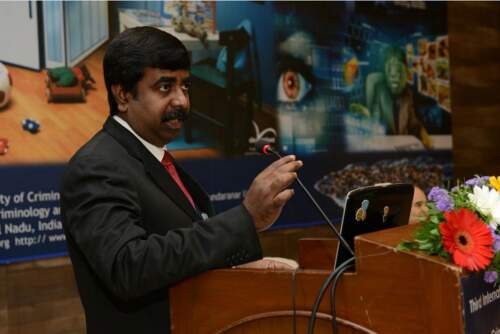 Prof. K. Jaishankar is the Professor of Criminology and Head of the Department of Criminology, Raksha Shakti University, Ahmedabad, Gujarat, India. He is the recipient of the prestigious “National Academy of Sciences, India (NASI) - SCOPUS Young Scientist Award 2012 – Social Sciences” and ISC - S.S. Srivastava Award for Excellence in Teaching and Research in Criminology. He is an International Ambassador of the British Society of Criminology (BSC).

Prof. K. Jaishankar is presently the Professor of Criminology and Head of the Department of Criminology at the Raksha Shakti University (Police and Internal Security University), Ahmedabad, Gujarat, India. Prior to the present position, he served as a faculty member at the Department of Criminology and Criminal Justice, Manonmaniam Sundaranar University, Tirunelveli, Tamil Nadu, India. He has published more than 101 publications, including articles, books, book chapters and editorials. He is the recipient of the prestigious “National Academy of Sciences, India (NASI) - SCOPUS Young Scientist Award 2012 – Social Sciences” and ISC - S.S. Srivastava Award for Excellence in Teaching and Research in Criminology.He was a Commonwealth Fellow (2009-2010) at the Centre for Criminal Justice Studies, School of Law, University of Leeds, UK and has completed a research project on Victims of Cyber Crimes. He is the founding Editor-in-Chief of the International Journal of Cyber Criminology and Editor-in-Chief of International Journal of Criminal Justice Sciences He is the founder President of South Asian Society of Criminology and Victimology (SASCV) and founder Executive Director (Honorary) of Centre for Cyber Victim Counselling (CCVC) He was a member of the UNODC (United Nations office of Drugs and Crime) Core group of Experts (15 member group) on Identity related crime (2007-08). He is a Member of the Membership and Advancement Committee, World Society of Victimology (WSV), International Advisory Board member of the Center for the Research and Development of Positive Criminology, Department of Criminology, Bar Illan University, Israel, Advisory Board Member of the Center for Cybercrime Studies, John Jay College of Criminal Justice, New York, USA and Member of the International Cybercrime Research Centre, Simon Frazer University, Vancouver, Canada, Member of the Scientific Commission of the International Society of Criminology (ISC) and Fellow of the African Center for Cyberlaw and Cybercrime prevention. He was a Discussant in the “Opening Discussion: Focusing on victims of crime – Comparing crime patterns and improving practice. Researchers’ advice to policy” of the Stockholm Criminology Symposium held during June 11-13, 2012 at Stockholm, Sweden and responded to questions of Beatrice Ask, Swedish Minister for Justice, and Paula Teixeria da Cruz, the Portugese Minister for Justice. He was a Keynote Speaker at the 15th World Society of Victimology Symposium held during 5 – 9, July 2015, at Perth, Australia and 14th World Society of Victimology Symposium held during 20 – 24, May 2012, at The Hague, The Netherlands. He is recently appointed as an International Ambassador of the British Society of Criminology (BSC). 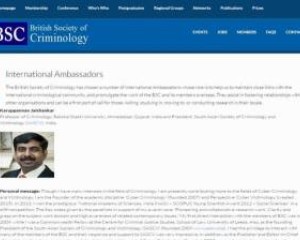 Appointed as International Ambassador of British Society of Criminology

Welcome Speech of Dr. K. Jaishankar, President of the South Asian Society of Criminology and Victimology (SASCV) during the First International Conference of SASCV at Jaipur during 15-17 January 2011.