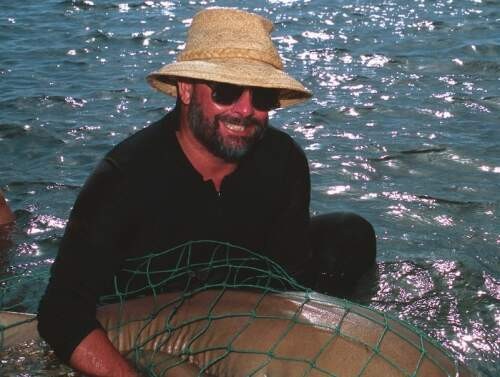 Dr. Jeffrey Carrier was a faculty member at Albion College from 1979 to 2010. He received his Ph.D. from the University of Miami in 1974. Dr. Carrier also holds an appointment as an Adjunct Research Scientist with Mote Marine Laboratory (Sarasota and Summerland Key, FL). He now serves as a consultant, providing public lectures on topics related to his shark research and south Florida ecosystems, and markets his underwater and wildlife photography for his company, Cirratum Productions, LLC.

Dr. Carrier's primary research interests center on studies of aging, growth, migration, and reproductive biology of nurse sharks (Ginglymostoma cirratum) in the Florida Keys. His studies with long-time colleague Harold L. “Wes” Pratt of Mote Marine Laboratory document the courtship and mating behaviors of nurse sharks, and his work has been featured on numerous television shows.

Carrier’s first book, a comprehensive review of the phylogeny, zoogeography, physiological processes, and ecology and life histories of sharks, skates, rays, and chimaeras, Biology of Sharks and Their Relatives, co-edited with Dr. Jack Musick of the Virginia Institute of Marine Sciences and Dr. Mike Heithaus of Florida International University, was published by CRC Press, LLC (March, 2004). The book was awarded a 2004 Choice Award by the American Library Association. A second Volume – Sharks and Their Relatives II: Biodiversity, Adaptive Physiology, and Conservation – was published in March of 2010.  Volume I has been completely revised and Edition 2 of that volume was published in April of 2012.

In addition to his studies of shark reproductive behavior, Carrier has been collaborating with the National Geographic Society’s Remote Imaging Laboratory to utilize Crittercam, an animal-borne video and data recording system, as an adjunct to studies of courtship and mating behaviors. A Crittercam carried by a 256cm (8.4 feet) male nurse shark during the 2001 pilot study is shown above as the large object attached below the first dorsal fin. A small VEMCO® Ultrasonic Transmitter, the smaller, red, cylindrical object below the second dorsal fin, is also used to aid in tracking these animals.

National Geographic On-Line joined Carrier and Pratt in the field for a week in June, 2002, and articles featuring their field study are featured on Geographic’s On-Line website (Geographic On-Line stories). This study is part of an on-going collaboration between Albion College, Florida International University, and the National Geographic Society’s Remote Imaging Lab, and was supported in part with funding from NOAA’s Sea Grant National Strategic Initiative Program, the W.W. Diehl Trustees’ Professorship, and Hewlett-Mellon Faculty Development funds from Albion College.

Physiology and reproductive biology of sharks and rays.

Wildlife photography, fly-fishing, motorcycles, and search and rescue as a member of the Coast Guard Auxiliary. 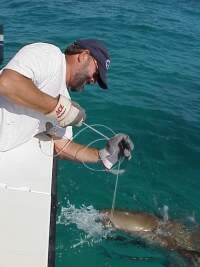