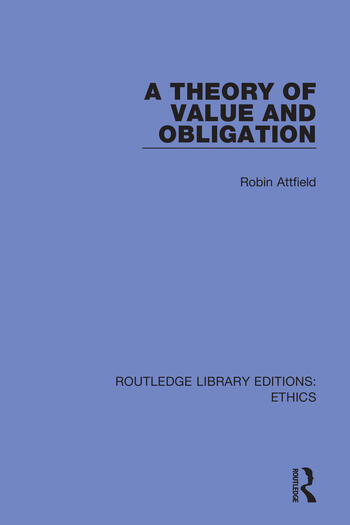 A Theory of Value and Obligation
1st Edition

A Theory of Value and Obligation was widely reviewed when it appeared in the 1980s. It is intended for higher-level undergraduates, research students and academics in the fields of normative ethics and meta-ethics. A small sample of the book is available on ResearchGate, where it has had over 1000 reads. But parts of the book remain to be discovered, such as its account of relative value, and its study of Parfit's examples relating to population ethics.

Firstly, the passage which has been much read on ResearchGate is about the scope of moral standing (what is the range of moral patients? - in Warnock's phrasing). This broadens what used to be regarded as the scope of morality, in a way that is increasingly recognised and appreciated. Second, the account of a good life (including meaningful work) will be found widely acceptable. Third, the account of meta-ethics was actually found by one of the reviewers to be original and persuasive. Fourth, this book supplies arguably a better theory of future-related responsibilities than any rival theory.

A Theory of Value and Obligation referred to a wide range of ethicists and their writing. It generated a range of criticisms, to which I replied in a new book, 'Value, Obligation and Meta-Ethics' (1995), originally published by Rodopi of Amsterdam, and recently republished by Brill of Leiden. My more recent books have been written in a more accessible style, but I am finding that A Theory of Value and Obligation continues to make a widespread impact. My textbook on ethics, Ethics: An Overview (2012) further expounds many of the main strands of TVO (but refers instead to 'Value, Obligation and Meta-Ethics'), and offers related teaching materials in a companion manual.

The ideas behind A Theory of Value and Obligation were developed in the course of teaching Moral Philosophy at Cardiff University from 1968 onwards. I devised a list of theses, and gave related teaching at the University of Ife, Nigeria in 1972-3. Many of these ideas derived from my study of philosophy at Oxford (1960-64); others were gleaned from Cardiff colleagues (now deceased) and from wide reading.