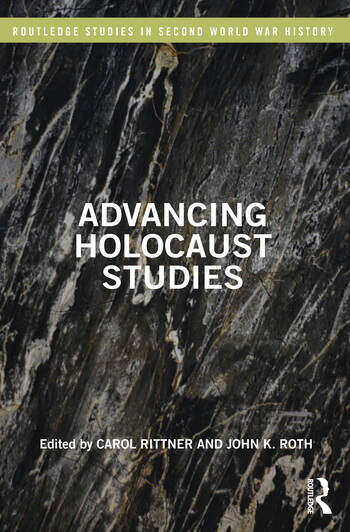 Advancing Holocaust Studies, which I compiled and edited with Carol Rittner, contains essays by leading Holocaust scholars--James Young and Deborah Dwork, for example--who discuss the challenges and responsibilities that the troubling and troubled third decade of the twenty-first century place on teachers and researchers in the field of Holocaust studies. Anyone concerned about the future of Holocaust memory and education will find the book compelling.

Each chapter shows how its author became committed to Holocaust education and research.  Second, each writer assesses the successes and shortcomings of Holocaust studies and education. Third, each writer explains why continued emphasis on the Holocaust, especially in our fraught times, remains imperative.

The growing field of Holocaust studies confronts a world wracked by antisemitism and racism, immigration and refugee crises, human rights abuses, mass atrocity crimes, threats of nuclear war, the COVID-19 pandemic, and environmental degradation.  Advancing Holocaust Studies shows what it means to advance Holocaust studies in such dire straits.  It assesses the field's major successes and failures, its challenges and prospects.

The contributors met to discuss their essays as that writing took place.  These discussions deepened and intensified the writing.