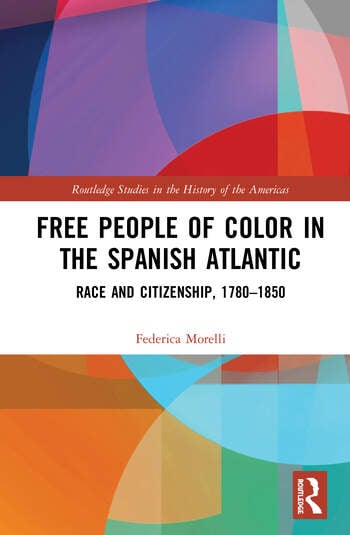 Free People of Color in the Spanish Atlantic
Race and Citizenship, 1780–1850, 1st Edition

Free People of Color in the Spanish Atlantic appeals to researchers and academics in the following fields: Atlantic World; Caribbean and Latin America; Black Atlantic; Citizenship Studies. It is aimed at upper level (year 3) and postgraduate student audiences. As an example of Atlantic history, it would also be assigned in postgraduate methodological seminars.

Free People of Color in the Spanish Atlantic's main highlights include the definition of citizenship in imperial societies, the construction of racial categories before the onset of the scientific racism, and the explanation of the Atlantic history as a field of study. By analysing the status of free people of color in the eighteenth- and nineteenth-century Spanish America, this book aims first to dissociate the concept of citizenship to that of nationhood, showing that the people of African descent were part of a broader question of what citizenship meant and to whom it could be offered. Secondly, it aims to demonstrate that the concept of race not only is operative at that period in Spanish America, but also plays an essential political role. Finally, through comparisons with the U.S., Portuguese America and Brazil, French and English Caribbean, it shows that the question of free people of African descent and their admission to citizenship is an issue of Atlantic dimension in this period.

The book is based on archival material collected in Spain (Seville and Madrid) and Latin America (Bogotá, Buenos Aires, Mexico City, Lima, Quito, and Santiago de Chile). Petitions and legal cases constitute the core of this material. The focus on court cases, rather than on constitutional or legal rules, disclosed indeed crucial information about how the society and the State considered citizenship and on which criteria the judges distinguished those who were members of the political community from those who were not. Drawing on this bottom-up approach, the book demonstrates that the access of free people of color to citizenship both in late colonial and early independent period is not established by state authorities, but results from complex dynamics between the state and the local society.

The idea of writing this book essentially responds to present concerns. Today, like two centuries ago, there are people living among us whose formal relationship to rights and citizenship remains unsettled and a recurring subject of political debate. How can a nation permit people to work, create families, and build communities within its geopolitical borders, but at the same time decline to extend them membership in the body politic? Two hundreds years ago, almost two million people, the majority of them born in the Spanish American countries, lived with their rights always subject to political whim and their belonging always subject to the threat of removal. We might say that their situation was not so different from today’s unauthorized immigrants and their children, who not only live in a situation of uncertainty regarding their access to rights, but could also be subject to expulsion.