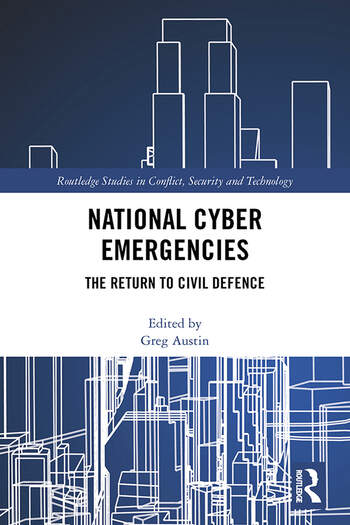 National Cyber Emergencies: The Return to Civil Defence analyses the escalating sense of crisis around state-sponsored cyber attacks that has emerged since 2015, when the United States first declared a national emergency in cyberspace. It declared the fourth such emergency in March 2020. It documents a shift in thinking in the USA, from cooperative resilience-oriented approaches at national level to more highly regulated, state-led civil defence initiatives. Although the American response has been mirrored in other countries, the shift is far from universal. Civil defence strategies have come into play but the global experience of that has not been consistent or even that successful. This book provides a vast canvas of international experience, including work on simulations, to stimulate new thinking.

National Cyber Emergencies: The Return to Civil Defence is among the first to address policy for the recently minted concept of “national cyber emergency” as it has been framed by several leading governments beginning in 2015 and 2016. The main element of this new framing has been a stronger, more direct link between classic cyber security as largely a commercial, business or law enforcement concern on the one hand and, on the other, national security interests, including international strategic competition, national economic viability, political subversion and war-fighting.The book reveals the tensions between the scale of preparations needed for a cyber crisis and the  inability of most countries to actually set them in place. The book should have some impact on two levels: helping leaders in government and business to strengthen preparations for national cyber emergencies; but equally convincing them of the need for  international collaboration to help prevent such events form occurring.

The book project led us to the concept of civil defence: the idea that the private sector, community groups and citizens need to play a bigger, more formalised role in national responses to a cyber emergency. Another departure point of this volume is the deeply political character of cyberspace competition among states that has been revealed in their more aggressive policies of the last five to ten years, but especially since early 2016. Problems of information warfare and countering political subversion in cyberspace are now linked irreversibly with the challenges of protecting critical national information infrastructure and national war-fighting capability in ways not widely accepted by most states before that year.

The volume depended on contributions from well-placed scholars and practitioners. It reflects a selection of national experiences (from the USA, Australia, India, China, Estonia, and Finland) and a number of key thematic issues (information weapons, alliance coordination, and attack simulations). Participation in this project from leaders of cyber exercises and simulation, notably from the military establishments of the United States and Canada, enriched the picture presented in the book.