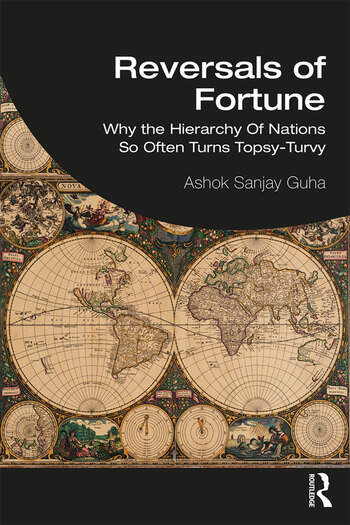 Reversals of Fortune
Why the Hierarchy Of Nations So Often Turns Topsy-Turvy, 1st Edition

Reversals of Fortune: Why the Hierarchy Of Nations So Often Turns Topsy-Turvy should change the way its readers look at shifts in the balance of economic and political power between nations. It should interest economists, economic historians, political scientists, students of these disciplines and general readers.

The traditional view of the bases of affluence and political power emphasizes either "good" institutions (those that maximize economic freedom) or technological progress. Reversals of Fortune: Why the Hierarchy Of Nations So Often Turns Topsy-Turvy disputes both these stories  It argues, with many examples that so-called 'free' institutions are neither necessary nor sufficient for economic growth. And, while technological progress improves the lot of the world as a whole, its major beneficiaries are rarely, if ever, the pioneers who developed the new technology.  It proposes instead that countries that acquire wealth and power will be those whose inherited endowments (including geography) best fit the requirements of new technologies that are appropriate in the current stage  world trade.  The book examines major trends in global economic development since the fifteenth century to illustrate this theory.
It also proposes a theory of how new technologies originate, a theory that stresses the role of the state in the early seminal phases.  Since states tend to subsidize technologies that support the interest of dominant groups and since these groups would typically be the ones that flourished under the old established technology, the state generally plays a technologically conservative role.  Exceptions however occur in state that have not prospered under the old regime and where therefore a section of the elite may be interested in the prospects offered by a new technology.  Old states successful under the old established technology may the find their status gradually undermined by upstart newcomers empowered by a new technology.

Working on this book taught the author, above all, the importance of cross-disciplinary research in social science, particularly the absolute necessity of checking the predictions of theoretical economic models against the facts of history.

The main incentive for writing the book was supplied by the questions posed by inquisitive students, not only of economics but those with a political science or history background.