Has the COVID-19 pandemic, killed the handshake? Dr John White, co-author of The Routledge Dictionary of Nonverbal Communication, considers the fate of handshaking by examining its history and psychology.

We find evidence of the handshake on every continent of our globe, with frequency and use being more widespread in some cultures than others. For example, in East Asian cultures handshakes are less common, being replaced by greetings such as bowing.

The History of the Handshake

Handshakes are an old human ritual. Evidence for one of our earliest known handshakes comes from an ancient Assyrian relief showing king Shalmaneser III holding the hand of the Babylonian king Marduk-zakir-shumi I.  There are some who argue that we should distinguish between hand clasping and hand-shaking. A hand clasp may not necessarily involve the vertical movement we associate with a hand shake.  For example, Knapp et al., (2014) argue that the handshake is only about 150 years old, being preceded by a hand clasp which dates back to ancient Rome.

Whatever interpretation you put on handshakes or hand clasps, it is fair to say that they are here a long time. One may ask why handshakes are so relevant to human communication? Psychologically, we find that handshakes can be interpreted as signalling formality, trust, friendliness and hospitality (Hall and Hall 1983).  Moreover, in numerous contexts they have positive effects on first impressions, such as business meetings (Dolcos et al. 2012), and contexts of negotiation (Schroeder et al. 2014).

At a deeper level, we argue that the handshake has a very primal sort of connection with strong emotional value.  In fact, we believe that handshakes can be traced back 60 million years! Chimpanzees and gorillas do much the same thing as us when it comes to handshaking. They long for tactile contact and basically reach out with the forelimbs, and especially with the palm to their peers.  For the homo sapiens, our brains devote an unusually large part of their surface area to hands and fingers. We respond to hands and their gestures with an extreme alertness because specialized nerve cells in the lower temporal lobe respond exclusively to hand positions and shapes (Kandel et al. 1991, pp. 458-59). Our hands are fiber-linked to an array of sensory, motor and association areas of the forebrain, midbrain and cerebellum, which lay the groundwork for nonverbal learning (Givens and White, 2021 – in print).  Hence the value of a handshake – or hand clasp!

For example, on sports fields, where athletes often shake hands before or after a game (e.g. football matches), the handshake provides an opportunity for skin-to-skin contact which can help signal the adrenal glands to limit the production of a stress-inducing hormone called cortisol. Indeed, throughout human history, the handshake has been an expression of peace and forgiveness.

Alas, it is also, in these Covid times, an excellent delivery vehicle for germs. Given the history just described and the neurological value of handshakes, it is difficult to imagine its total extinction. We think it may well take a sabbatical for a number of years and perhaps re-emerge once again as a valuable means for signalling trust, friendliness, formality and hospitality. In the meantime, we may need to consider other forms of greeting. First to mind comes the bowing style typified by Asian cultures, but perhaps our favourite is the Plains Indian greeting where you raise your palm out and shine it at another person from a distance.

Is nonverbal communication related to your course? Request an inspection copy of The Routledge Dictionary of Nonverbal Communication, by Dr John White & Prof. David B. Givens. The book aims to provide the reader with a clear understanding of some of the relevant discourse on particular topics while also making it practical and easy to read. It draws on a wide selection of discourse from fields such as neuroscience, psychology, anthropology and psychiatry.

The Routledge Dictionary of Nonverbal Communication 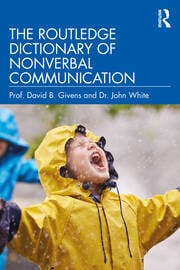 This textbook examines a very wide selection of nonverbal behaviors, actions and signals to provide the reader with an informed insight on the world around them and its messages. Compiled in the form of a dictionary, the book is presented as a series of chapters with alphabetical entries, ranging from attractiveness to zeitgeist. 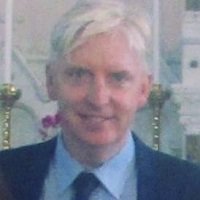 The Paradoxical Wonderfulness of Knowing the End of Life Is Near

Written by David & Brett, this blog discusses socioemotional selectivity theory and the joy of aging.