Since the passing of the JOBS Act in 2012, we have seen many firms, across many industries, transition from utilizing traditional fundraising techniques to raising capital via crowdfunding as allowed by the Act. Rather than depending on in-person meetings with a major investor, firms are now raising money from many different interested investors, entirely online.

Although crowdfunding is a new concept to many people, it was in fact the primary method for raising capital before the Great Depression of 1929, and the subsequent passing of the Securities Act of 1933, which effectively banned the practice. The JOBS (Jumpstart Our Business Startups) Act of 2012 allowed for crowdfunding once again and was written specifically for small businesses, as its name suggests. However, an unintended consequence of the Act was that it allowed real estate syndicates to efficiently summon capital from myriad different sources . The real estate industry has dominated capital formation as a result. The proliferation of crowdfunding may seem somewhat unpredictable, with the practice finding success in some industries, whilst being stifled in others . Yet, on closer look, there are a number of reasons why the real estate industry has enjoyed an exceptional degree of success.

The most obvious reason why the real estate industry has experienced such a dramatic evolution is that the passage of the JOBS Act created an opportunity for real estate developers to advertise investment in their deals for the first time since 1933. Because private real estate companies were previously very limited with how they could raise capital – they could not solicit funds, for example, from anyone with whom they did not already have a pre-existing relationship – they were uniquely disadvantaged when trying to compete for private investor capital. This reliance on pre-established networks created a situation in which only the already existing, typically wealthy firms could really succeed by tapping into their own private networks of high net worth investors.

The JOBS Act reversed several 80-year legal precedents originally set by the 1933 Act. Suddenly, any private real estate firm, no matter the size and track record, could solicit small donations from otherwise unconnected individuals. They could reach individuals via traditional media (such as print), but, perhaps even more importantly, they could also reach potential investors via social media, online networks, and various other modern, digital methods. With the passage of a single piece of legislation, those who were involved in the industry quickly discovered they now had many different ways to access capital and investors everywhere suddenly became their target market.

The reversal of 1930s security laws created a new frontier for real estate developers looking to raise large amounts of capital. Relying on a single institution or small group of high net worth individuals to complete a multi-million-dollar project had proven itself to be time-consuming, inefficient, and inaccessible to those without the right connections. The passage of the JOBS Act democratized the industry, removing barriers to entry, and allowing many different investors to participate in a single project.

Of course, the unique nature of real estate also positioned the industry to benefit from these changes. Real estate, contrary to typical “paper” securities, is tangible and finite. It is also a commodity that, unlike a stock, can only be split so many ways. Outside of Berkshire Hathaway Class A, and perhaps a few other securities, most individual investors can afford to buy a single stock on their own, which removes much of the need for crowdfunding. But there are countless real estate projects that require tremendous amounts of capital that most interested investors cannot otherwise access on their own.

The introduction of crowdfunding has enabled many people to pool their money together in order to complete a specific project. And, best of all, this entire fundraising process is still possible without the need for the corresponding project sponsor to first issue an initial public offering.  In other words, the real estate industry has found itself in a position where it can get the best of both worlds – combining private equity structure with access to the general public’s capital.

It has been just a few years since the JOBS Act was passed into law and, already, we have seen the real estate industry evolve in many ways. Both firms and individuals have more potential methods for accessing the capital they need, which has helped push the industry to continue innovating and diversifying. In many ways, we are still at the frontier of a very exciting era. If current trends continue into the foreseeable future, the broader industry will be advanced even further and investors will have an ever increasing array of real estate options to consider for their financial futures.

Adam Gower Ph.D. is an authority in content marketing and online communications for the real estate industry. He has more than 30 years and $1.5 billion of transactional experience in commercial real estate finance and investment. Today he builds best of class digital marketing platforms for private clients so they can raise more capital online and provides online courses for those who want to do it themselves – all at GowerCrowd.com. Dr. Gower also teaches real estate investment and finance at University level and is the creator of online courses guiding students through investing wisely in real estate. His latest book is Real Estate Crowdfunding, An Insider’s Guide to Investing Online, published by Routledge. 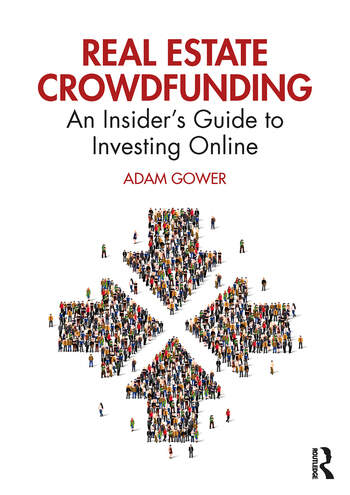