By Ian Corbett, Coordinator of Audio Engineering at Kansas City Kansas Community College and author of Mic It! Microphones, Microphone Techniques, and Their Impact on the Final Mix

During these pandemic related restrictions, I’m doing less miking, and more editing and mixing – of virtual ensembles. Somebody else, usually a musician, is doing the miking. If the musician is tech savvy and has a real mic and an interface, or even a USB mic hooked up to their computer, that’s a fortunate situation. But for most of the things I’ve been working on, the musicians are not audio engineers, haven’t read Mic It! and are recording on their phones in their living or dining rooms. There’s nothing good about the room sound or the signal flow!

I’ve read a lot of materials online about how expensive restoration and editing software is essential for this type of production. While that might be true for professional projects with larger budgets and the highest expectations, amateur ensembles and lower-budget projects can still be done to acceptable standards and create a satisfying experience and meet (and exceed) many people’s expectations using the stock tools in your DAW. Certainly, products such as Izotope’s RX, and Celemony’s Melodyne and their competitors will certainly help, A LOT, and make the editing process significantly quicker and easier. But without the budget for those, as long as you have fairly decent performances coming to you, and if you have a musical ear, you should be able to make the ensemble members sound like they are a “group”, and tighten them up to an acceptable standard with stock DAW features.

Too many people hear about expensive editing software, and forget that we CAN go back to the manual methods we used to use. In fact for a quick one-note pitch correction it’s often quicker to do a manually rendered pitch change than take the time to set up a plug-in to do it correctly.

Here are a few thoughts about some common corrections needed:

Even if you have Autotune type software, there’s very little “auto” about it – especially if the ensemble is umm, “amateur”, and the performer is more than a few cents off. Be prepared to use manual correction modes in whatever software you use. Don’t always correct it 100% – it can become too correct, or if you over-correct multiple voices in a choir for example, they will lose the thick “chorus” sound.

If you do not have dedicated pitch correction software, and have just a few spots to touch up, this can usually be easily accomplished using rendered pitch change processes in your DAW, assuming you can recognize whether and how much flat or sharp a note is: 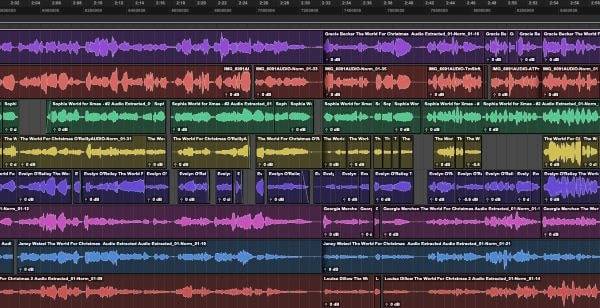 Figure 1: When time and budget are limited, you have to be realistic with the client regarding what is possible. Here, just under a minute of audio is shown, with the edits used to rhythmically tighten up the choir. Some are simple “separate & move” operations, others involve time stretching. Complete perfection is not the goal – it needs to be representative of a live amateur ensemble, not a professional studio recording. Note that ALL edit points are checked for clicks, pops, and glitches, and fades and crossfades are applied where necessary.

You can use audio warping type features, or even fully manual region/clip separation followed by time compression/expansion if you need to. Become familiar with your software and keyboard shortcuts, and sometimes it can be quicker to go old school for smaller edits:

In the case of a choir, a little drift is acceptable and makes it sound like a natural “ensemble”.

Starts and Ends of Notes

If singers or instruments don’t start or end together at the beginning or end of a phrase, you can use time warp features, or even separate the note and time compress/expand each one to line them up – but this often produces weird sounds and timbral artifacts because the software is compressing/expanding such a small chunk of audio that the waveform often gets a bit “loopy”.

It’s easy to shorten longer last notes, or early entries. As long as at least one strong voice/instrument is “on” the attack or release of the note, and the other performers either enter early at the start of a phrase, or sustain too long at the end, you can usually get away with deleting the excess material, and a quick fade in or fade out of the offending part under the start or end of the good one. Our brains will recognize the details from the good one, and “impose them” on the subordinate tracks. 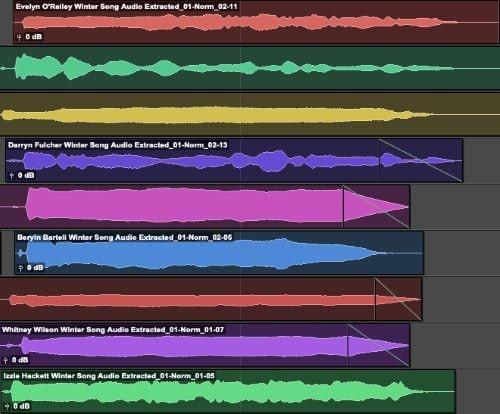 Figure 2: Tightening up the end of a phrase. The red and green tracks are used as the “guide” or “reference”, as they are the strongest and most correct. Other voices (that held the note too long, or put the last syllable in the wrong place or for the wrong duration) are cut off, and faded out leaving the more correct tracks to carry the last syllable. Time expansion did not work, because the short duration produced noticeable glitches and artifacts, and it didn’t fix some final syllable time problems. This was deemed the quickest solution (given the engineer’s skill set) to keep the project on schedule and budget.

If you’re sent stereo tracks by the singers or instrumentalists – pick the louder or best sounding channel, and delete the other one. While Mic It! discusses definite advantages to discussing stereo spot-miking in ensemble-at-once recording, chances are, for a singer or most solo instruments in a virtual ensemble, you don’t really need a stereo version, and it will just clutter the image and use twice as much processing power in your DAW. (Drums and piano are some of the only common sources that would be good to have in stereo).

Don’t sweat it! If somebody’s phone recording is far too roomy, de-reverbing plugins are available, but they are expensive. Do you really need it for one or two of 20 tracks? By the time 10 other voices/instruments are added to it, (plus any instrumental accompaniment,) and you tuck it down in the mix, the excess room sound in one mic will become much less noticeable. Taming a domestic room using everyday household materials is discussed in Mic It!

If All Else Fails…

Try deleting the track or phrase! In the context of a large ensemble, nobody is going to notice if one of many unison instruments gets very quiet or is muted/deleted for a phrase or section. Be realistic about the goals given the time and budget for the project, and communicate that to the client. In my experience they appreciate that for non-professional groups, the source tracks can be of “variable” quality and come with compromises, and usually just want a good sounding product on budget, and on time. In fact, I’ve frequently been told to “just delete singer X here and Y here”… 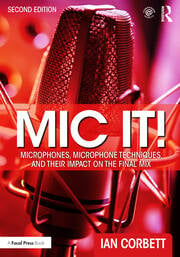 Capture great sound in the first place and spend less time "fixing it in the mix" with Ian Corbett’s Mic It! With this updated and expanded second edition, you’ll quickly understand essential audio concepts as they relate to microphones and mic techniques and learn how to apply them to your recording situation..

Ian Corbett is the Coordinator of Audio Engineering at Kansas City Kansas Community College. He also owns and operates off-beat-open-hats LLC recording and sound reinforcement. He is a frequent presenter at conferences and universities around the world, and currently a regional Vice-President of the Audio Engineering Society. He has experience in a wide variety of audio fields, including location recording, sound reinforcement, studio recording, theatre, television and radio.