In work, as in life, differences between rhetoric and reality are revealing. If work is fundamental to the dignity of a person (according to The Pope), then perhaps indignity is now a fundamental characteristic of work. My book, The Dark Side of Management – A Secret History of Management Theory, examines how managers have acted as neoliberalism’s executioners in ensuring that contemporary workers exist in a precarious world without control, democracy or power.

In assessing the managerial role in contemporary society, it’s important to look at a number of tools and techniques:

So, management as neoliberal therapy redeems us and makes us human.  If we would only follow our leaders, their enlightened management would allow us achieve health.  This vision of management as freedom again echoes Orwell. By shining a light on the dark side of management, we can see its utility as an extension of control to a core white male population. This echoes earlier global elite efforts to extend control over “other” groups in society, such as children, women, colonised peoples, and non-whites.

As the transformation to a knowledge-based economy has failed to emancipate employees, a new “platform capitalism” conjures a future with the management elite shrinking as they are replaced by technology. This is perhaps management’s ultimate achievement – rendering even itself redundant. Welcome to The Dark Side of Management – a history of violence which, like a track from The Dark Side of The Moon originates from an illusion of choice where in fact there is none.

Gerard Hanlon is Professor of Organizational Sociology at Queen Mary University of London, UK. As well as this book, he has recently co-authored a chapter (“On the impossibility of business ethics”) to The Routledge Companion to Ethics, Politics and Organizations.

Find out more about the book here! 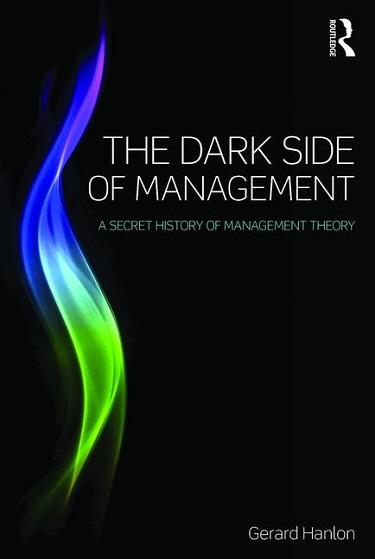