Swearing these days is understood generally as the strongly emotional use of taboo terms to carry out such acts as abusing, offending, letting off steam, intensifying what is being said or simply signalling displeasure.

The first article in our Questions About Language series challenges the popular view that swearing is a sign of verbal deficiency, and that people resort to cuss words when they have no others at their disposal. And yet, comments author Kate Burridge, there is no research that suggests this link, and nothing to support the branding of swearers as “ignorant”, “lazy” or “stupid”.

Do people swear because they don't know enough words?

The reason swearwords attract so much attention is that they involve taboos, those aspects of our society that make us uncomfortable. These include the usual suspects – private parts, bodily functions, sex, anger, dishonesty, drunkenness, madness, disease, death, dangerous animals, fear, religion and so on. 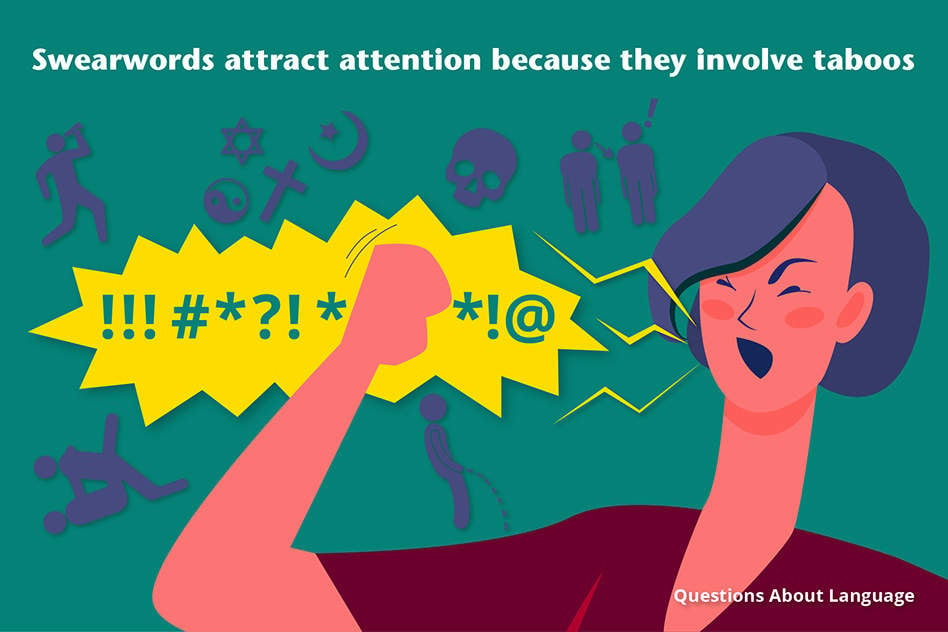 Taboo terms then provide the ready-made material for swearwords, and though there’s remarkable agreement across languages, taboos do differ from society to society and they will also change over time:

For example, the English history of foul language has seen the sweeping transition from the religious to the secular. When blasphemous and religiously profane language was no longer considered offensive (at least by a majority of speakers), what came in to fill the gap were the more physically and sexually based modes of expression, e.g. the so-called F and S words. More recently, it’s the  ist taboos that have stepped up to the mark, making sexist, ageist, religionist and especially racist language not only contextually offensive, but legally so. (Geoffrey Hughes’ Swearing: A Social History of Foul Language 1998; An Encyclopedia of Swearing 2006).

So why do we swear?

Here are some examples of the reasons why we swear and how we might find ourselves using them in everyday life:

Wow!, Ouch!, Shit!
They are uttered in intense emotional situations, such as when a speaker is angry and frustrated, under pressure, in sudden pain, or confronted by something unexpected and usually, though not necessarily, undesirable.

The bastard stole my pen
Malediction can also “add insult to injury”, and we do this by means of curses, name-calling, any sort of derogatory or contemptuous comments to intentionally slight, offend or wound a person in some way.

By far the most usual type according to research, this is the use of swearwords to display in-group solidarity (especially when directed against outsiders), as a part of verbal cuddling or simply friendly banter.

We’re gonna bloody start doing that bloody extension to the house
The function of swearing can also relate to the manner of expression. For example, speakers might choose a taboo word (over a more benign synonym) and use it to display a particular attitude to what is being said; this might be exasperation, disapproval, surprise and so on.

The hidden benefits of swearing

Paradoxically the line of reasoning given to argue the case against swearing is often the very same given in favour of swearing – people use swearwords when they have no others at their disposal. However, in the pro swearing case, the taboo language is not perceived as a limitation or flaw in someone’s character. “Instead, the argument says that there are certain situations in which no other words would be appropriate” (Andersson and Trudgill’s Bad Language 1990: 64).

Indeed, all sorts of studies – linguistic, psychological, physiological and neurological – back up the story that swearwords are more arousing, more shocking, more memorable and more evocative than other language stimuli (Forbidden Words by Allan and Burridge 2006: 244–50). So, is it any wonder that people reach for them to vent spleen, hurl abuse, let off steam or simply colour their language? These words express a sentiment that ordinary words cannot.

Evidence abounds that swearing is an emotion-based coping mechanism that makes us feel more resilient. Speaking on her book Swearing is Good for You, Emma Byrne is quoted as saying “[s]tudies show that when you put people in stressful situations and tell them they cannot swear, their performance goes down and their experience of stress is much greater”.

As well as the neurological and linguistic evidence for the emotional impact of cuss words, other benefits of swearing explored by Burridge include; swearing helps alleviate pain and makes you stronger; that abusive profanity replaces physical violence.

There is one final category of swearword that needs attention – those swearwords that are used with such regularity it is hard to imagine there is any auto-cathartic value in them at all.

Lashings of obscenities have become the earmark of celebrated chef and restaurateur Gordon Ramsay, so much so that one of his television cooking series is called “The F-Word”. A single episode of an earlier series Ramsay's Kitchen Nightmares featured some version of this F-word on no less than 80 occasions over a 40-minute period!

Ramsay uses obscenities where other people might use like, well, I mean, you know, and the like. Their frequency contributes significantly to people’s negative perceptions of swearing, as well as the assessment that someone like Ramsay has a stunted vocabulary (he would probably do well to heed the warning by Vogue editor Joan Campbell (1986) that “nothing is more deadening to the taste buds than a flavour repeated too often”).

To swear or not to swear?

So swearing does appear to have a number of useful functions – what does this then mean for the popular perception of swearers as having under-developed vocabularies? This is a notion that researchers Jay and Jay (2015) have dubbed the “poverty-of-vocabulary” assumption – the idea that people resort to taboo words because they can’t find better words with which to express themselves. Measuring people’s overall linguistic fluency and correlating this with their taboo language use is not an easy task, but what research has been carried out does not support the popular view in any way.

…And as author and linguist Kate Burridge reminds us:

Swearwords are socially and emotionally indispensable, vital parts of our linguistic repertoires that help us mitigate stress, cope with pain, increase strength and endurance and bond with friends and colleagues — it’s not for nothing they are described as “strong language”.

Find out more or purchase the title here.

Look out for upcoming articles from the Questions About Language blog series based on the book by Laurie Bauer and Andreea Calude, asking Is Talking Work, Doing Work? and What makes a Language a Language?. Discover more titles from our Linguistics range here. 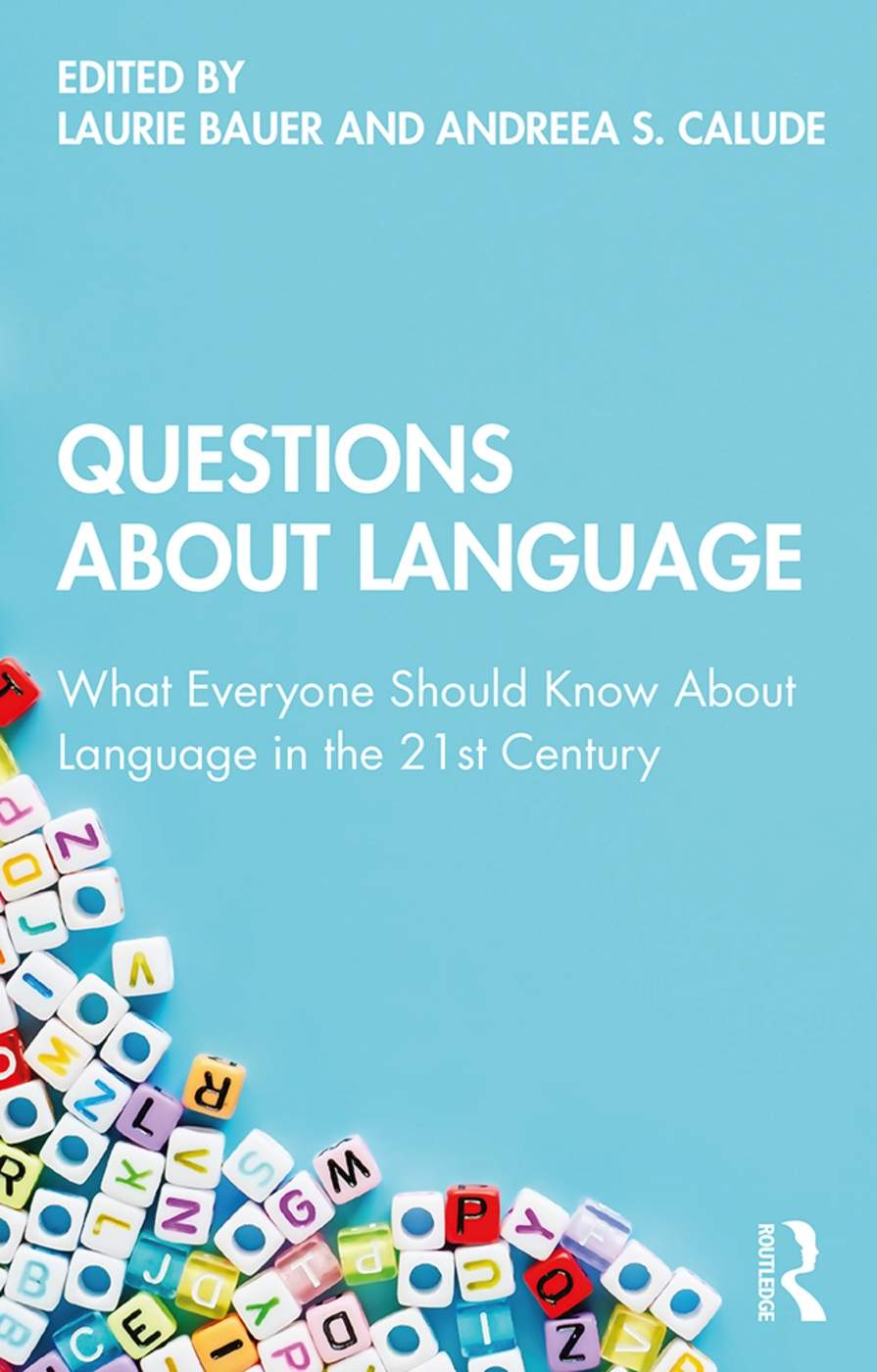