In She Took Justice, we see centuries of courage in the face of racial prejudice and gender oppression. We gain insight into American history through The Black Woman's fight against race laws, especially criminal injustice. She became an organizer, leader, activist, lawyer, and judge – a fighter in her own advancement.

These engaging true stories show that, for most of American history, the law was an enemy to The Black Woman. Using perseverance, tenacity, intelligence, and faith, she turned the law into a weapon to combat discrimination, a prestigious occupation, and a platform from which she could lift others as she rose.

The author of the book, Gloria J. Browne-Marshall, was kind enough to spend time answering some of the most pressing questions on the topics of the Black Woman, Law, and Power.

1. What motivated you to write this book?

These stories were revealed to me while researching my book “Race, Law, and American Society: 1607 to present.” I discovered Black women who had contributed to American history and had used law or tried to use law to fight against their circumstances. I decided to write a book about them. I truly believe that Black women are miracles. Imagine the three Black women who survived the Salem Witch Trials or those women who sued for their freedom in court like Mum Bett or having the courage to challenge literacy tests and poll taxes in the deep South, it’s amazing.

2. Was it difficult finding enough stories?

Initially, I didn’t know if there were enough women to sustain a book. Later, I realized there were so many amazing women that I had to leave out many of them. When I was near the end of writing She Took Justice, I knew that there must be two books. She Took Justice tells the story from Queen Nzingha to Shirley Chisholm. Sojourner Truth brought four successful lawsuits and one of them was against the man who sold her son into slavery. This first book includes the Black suffragettes fighting for the vote and against concubinage while others were getting law degrees and bringing lawsuits. The second book will pick up the story and take it from the Black Power Movement to present-day.

3. What do you find is the best attribute of She Took Justice?

As a reader, I like stories. Each woman has her story of various lengths and there is the time-line that takes one on a journey and includes dozens of little stories. My books are accessible and can be read by students as well as historians and lawyers and, of course, the general reader. Although I am writing about legal cases or laws it is the drama of these true stories that will capture a reader’s attention. Also, I have added a bit of poetry.

4. What did the women teach you or what did you learn from them?

I learned that tenacity is good. Too often, Black women and women generally, are viewed as too ambitious, too pushy but these women are tenacious by need and desire. These Black women had to speak up for themselves and their communities. That takes tenacity. The women in She Took Justice also use creativity and intellect. This mixture of body, mind and spirit sustained them during horrific times of injustice based on their gender and race. Fighting the good fight is never wrong.

5. What can the reader gain from reading these stories?

All readers will be moved by the true stories in She Took Justice. Readers will learn about American History and women’s history. Most importantly, all readers will come away with a deeper respect for The Black Woman. Not just as a survivor but as a heroine in her own right. She is a super woman extraordinaire deserving of accolades. There were times when The Black Woman had only a small light inside to remind her of the dignity she possessed when law, and God and society turned its back on her humanity.

6. You capitalize The Black Woman. Why?

The Black Woman is used to signify the collective. I wanted my story of Black women to be placed in a collective journey in which individual stories will tell how The Black Woman moved from Africa to the Americas and then to the White House with the rise of Vice-President Kamala Harris and First Lady Michelle Obama. The Black community is a collective filled with individual stories. My book was meant to capture that effect. Simon Schama used this collective story-telling in his book on the Jews. I thought it would be an excellent way to tell the collective story of Black women in America.

My career began as a civil rights attorney. I teach constitutional law. I know the power of law as a tool of oppression and a weapon for liberation. But I also used law as a prism to tell The Black Woman’s story because legal cases are written down. So, the truth is as true as the court reporter at the time. In colonial Virginia, the legal cases were written down. Their truth can be what is written and what is left out or unstated. But, I believe law provides such great stories. Law is more than television judges. The people behind the cases have always fascinated me. I began with my “Race, Law and American Society” book and want to continue to reveal the drama and conflict behind the cool dispatch of legal reasoning.

8. I want you to choose between your darlings. What woman’s story is your favorite?

Every day I think of a different story to lift me when life is tough. These Black women did more with less and fought greater demons than we will ever see. I think of Celia fighting against rape and Mary and Anthony Johnson coming to colonial Virginia and starting a family. I consider Harriet Tubman and Harriet Scott, who was the force behind the Dred Scott case. Every woman deserves their time in the sun. 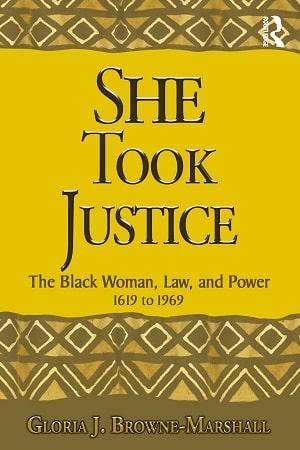 She Took Justice: The Black Woman, Law, and Power – 1619 to 1969 proves that The Black Woman liberated herself. Readers go on a journey from the invasion of Africa into the Colonial period and the Civil Rights Movement. The Black Woman reveals power, from Queen Nzingha to Shirley Chisholm. 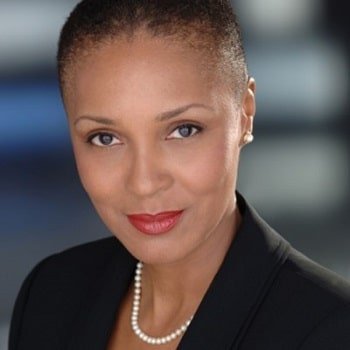 Gloria J. Browne-Marshall is a writer, civil rights attorney, playwright, and Professor of Constitutional Law at John Jay College (CUNY). Gloria taught in the Africana Studies Program at Vassar College. Prior to academia, she litigated cases for the Southern Poverty Law Center, Community Legal Services, and the NAACP Legal Defense Fund, Inc. She is the author of Race, Law, and American Society: 1607 to Present, The Voting Rights War, and The Constitution: Major Cases and Conflicts. Gloria is the recipient of a Pulitzer Center Grant and Frederick Lewis Allen Fellowship.