Written by Alan Cruttenden, Professor Emeritus of Phonetics, University of Manchester, and Fellow of the Phonetics Laboratory, University of Oxford. He is the author of Writing Systems and Phonetics.

During the recent and ongoing pandemic, we have all had to adjust our lives. Mainly by staying home more. Social occasions have had to be curtailed, where we talked when visiting family or friends, or in restaurants, or in the bar after playing a sport, or over lunch in academic common rooms. Some of this talk could continue by video but only a limited part of it. We can make up part of this shortfall in social interaction by, for example, watching more television, but we can also read more. In many of our lives there has thus been a shift in the balance between less talking and more reading (and for some creative people by more writing as well). What is the connection between spoken and written language?

The invention of language is often considered the biggest achievement of the human race and one which marks us out as different from other animals. And nobody disputes that it was speaking that came first and that it preceded writing by many thousands, maybe millions, of years. And it is just the amount of this speaking, or rather talking (because that is what gives us the social interaction), that we have been denied. In particular we miss the sort of talking that goes on face-to-face with all its accompanying facial and bodily gestures. Video chats can make up for some of this but these are usually timed affairs occurring only a limited number of times a week, if at all.

So, when our talking is so limited, we may use written language more. And it is at times like this that we appreciate its worth. The invention of writing (first seen in Mesopotamia and Egypt) can reasonably be claimed as the second big invention (after speaking) of the human race because, among other things, it allows us to pass on our writing, be it social or cultural or explanatory, to other people and even to later generations. So we can use writing to keep in contact with our family and friends (nowadays by email or by social media like Facebook or WhatsApp). Moreover, we can fill up our time by reading what other people have written at a different time and in another place, either just recently or in the near or distant past.

Writing in many languages

Today written language in the world has come to be dominated by writing using the Latin alphabet, and even more so by English. And a lot of that extra reading and writing that we have recently been forced to do is in English. People in other European countries will read and write in languages which also use the Latin alphabet. But in many parts of the world people use totally different systems like, for example, those for Arabic and Chinese. But nowadays possession of a computer or a smart phone enables our email communication to take place in the language of our choice, and many webpages, like those for example on Wikipedia, can be translated into our preferred language at the press of a key. What’s more I can make my computer or iPad or iPhone operate with a keyboard to fit this language. All this makes keeping in touch or reading for pleasure during Covid so much easier than it was in the pre-digital age.

A lockdown with some form of social isolation may tempt some people to learn a foreign language. Speakers of European languages learning another European language will soon become aware that, though there is a common Latin alphabet, different conventions have to be learnt. There may be different letters or the addition of extra marks (technically called ‘diacritics’) as in French œil, German spät or Spanish niño. And learning a foreign language with a different writing system will be more difficult. But when we are stuck at home, once again the internet will make it all so much easier. Particularly learning to read the new language. What’s more lots of websites used for language learning will add pronunciations to the written forms, so even our speaking or listening can be learnt or improved.

The blessing of writing

How much more depressing it would have been had something like a lockdown been imposed on a community before writing was so widespread (as indeed it is for present-day communities who are not literate). They would have, and may still have, no written language to fall back on. Most of us should count the blessing of written language which can in many ways function as a substitute for spoken language. 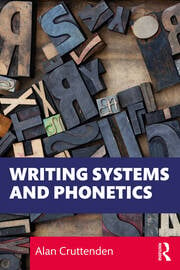 Writing Systems and Phonetics provides students with a critical understanding of the writing systems of the world. Beginning by exploring the spelling of English, including how it arose and how it works today, the book goes on to address over 60 major languages from around the globe and includes detailed descriptions and worked examples of writing systems which foreground the phonetics of these languages. 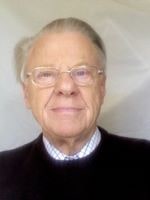 Alan Cruttenden is Emeritus Professor of Phonetics at the University of Manchester, and Fellow of the Phonetics Laboratory, University of Oxford. He has published widely in phonetics (and has written books on child language, intonation and the phonetics of English). His recently published book is Writing Systems and Phonetics.