When Boris Johnson spoke of the rule of six, in his Downing Street press conference on 9th September, which would make 7 people from different households meeting illegal I was – sorry to be frivolous – reminded of English public school stories going back to Billy Bunter. Break the rules (as Bunter always did) and you would get six of the best, being caned six times by the headmaster Back to serious.

The imposition of the rule meant however I could stop worrying about one little detail. When I started to write Surviving Lockdown in April, I worried the book would be out of date by the time it was published even though I agreed to write it fast – and my editor to edit it fast.  The virus would have ‘petered out’, a vaccine would have been found and the virus would be history.

It is the nature of predictions to be wrong and mine was.

On 9th September Boris Johnson, the British Prime Minister, announced the rise of cases was worrying and imposed the rule of six. Professor Chris Whitty, the Chief Medical Officer, explained such restrictions were vital to stop the virus getting out of control.

In the UK after September 7th, close to 3000 new cases have been reported a day even though the test and trace system would be better called the test and don’t trace everybody. Everyone was pleased when daily deaths fell to under ten but on September 8th they were back to 30. Certainly not as bad as the peak, but the virus refuses to lie down.

Part of the problem is that we live in a post-deference world so when leaders tell us to do X we wonder if it is a total lie, a partial lie or something which has only some small connection with the truth. When Johnson says wash your hands, does he really mean wash your feet? Probably not, but…

It is amazing- given his mantra (that the pandemic is a hoax, that you don’t need to wear masks, and that anyway, it is all the fault of Chinese)- that Donald Trump has been nominated for the Nobel Peace Prize. The Top Twitter Freaky prize might be more appropriate.

In the film I just produced, London Unplugged (which my son and I made between 2017 and 2019), we looked at the anxieties young people in London face. Lack of cash, lack of love, lack of good work and- in what was then our busy city- lack of a decent room at a decent price. No one was bothered about any illness and a virus would have seemed to be from Outer Space – the Martian Germ.

But six months after the pandemic started we have many new anxieties - our lack of certainty being key. When will there be proper treatment? How do we deal with our relationships when they have to be conducted remotely so much? Will our work continue? One key to Surviving Lockdown is to find strategies – often small often obvious – to survive the endemic pandemic. 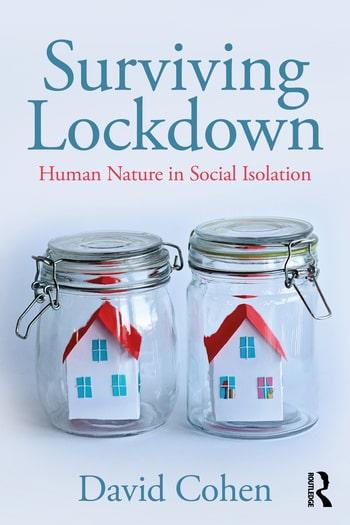 David Cohen is a prolific, bestselling author, documentary filmmaker and psychologist, who has written more than 35 books.

His film and TV work has been equally successful and wide-ranging. Some highlights include his film on the Soham murders, When Holly Went Missing, (ITV) which was nominated for a BAFTA award. He produced Diana The Night She Died (Channel 5) on the death of Diana. He co-produced Deadline Beirut, a feature film starring Anne Parillaud about journalists in Beirut when the American Embassy was bombed, which won awards at the Paris and San Francisco film festivals. He also produced London Unplugged, a London equivalent of Paris Je t’aime – twelve short stories of the city which was shown at some 23 cinemas. The Radio Times compared it to Paris Vu Par, a series of shorts made by Truffaut and Godard.
He first worked with Routledge in 1977 for the publication of his book Psychologists on Psychology and is now one of our best-loved authors. Cohen’s academic work mainly concerns child psychology, masculinity and theories of psychology. He has contributed to many papers and magazines including The Times, The Sunday Times, The Daily Mail, The Guardian and the New Scientist. In 2002, he was elected by the Royal Society of Medicine as a Fellow, in honour of his contributions in Psychology.