How times have changed. I never dreamt at the beginning of my teaching career, some forty years ago, I’d write a book titled, TEACHING VALUES of BEING HUMAN, a practical celebration of the virtues of being human. It’s filled with guided conversations, lessons, and activities, that campaigns the connection between curriculum, emotional intelligence, learning and life-long good mental health.

Why did I write it? Because we now know that emotion rules reasoning and learning, and relationships between educators and students make or break the possibility of all kinds of success in the classroom. TEACHING VALUES of BEING HUMAN quickly became a popular text, globally, but imagine if I’d written and released it forty years ago? I’m sure it would have been an epic failure because educators didn’t fuss about nurturing social connections between students, emotional awareness, growth mindset, resilience, and mind health. Back then, many teachers delivered subjects, they didn’t have to relate to students, didn’t have to be likeable and could talk to students in ugly, condescending, and demanding ways. When a punishment left a teacher feeling unsatisfied, they could order a student’s parent to deliver extra discipline that evening. The power teachers had over students and parents was so great that the teacher usually had the final say.

Over time, society broadened its understandings about tolerance about misconduct, punishment, and restoration. And slowly, very slowly, schools began to reflect these trends as well. Consequently, the power imbalance between teachers and students began to shift and it became evident that what was once the mainstay of control no longer had a place. Chat with anyone who was teaching in the 1960’s and they will tell you that relationships between students and ‘authority’ changed almost overnight. It was around 1990 when hitting and canning children was phased out in Australia. The truth is, that there were many teachers who never relied on corporal punishment and demanding ways and even though it had great traction. For others, nothing would ever replace the ‘instant power hit’ that came from inflicting physical pain!

Suddenly, teachers were asked to take a crash course in behavioural theory. They were coached to give students ‘time out’ instead of hitting them. Unfortunately, some teachers became stuck on using this one-dimensional approach because it also possessed the capacity to alienate and isolate children. Also, around this time, world leaders made a historic commitment to children by adopting the United Nations ‘Convention on the Rights of the Child’. This ratified that all children require a separated, safe space called, childhood.  A space where children were entitled to feel love, connection, and attachment from parents, from extended family and from teachers because, in this space, children thrive. Jean Piaget’s work, amongst others, showed that children were not born as little adults in small bodies (Piaget, 1936). Rather, children progress through stages of cognitive development as they begin to comprehend the world and their place in it.

Gradually, we began to talk openly, and frequently, about ways to improve children’s wellbeing and their longer-term potential to have mentally healthy and productive lives. Slowly, interest grew about how to build environments that nurture resilient mindsets in our young. Research around Social and Emotional Literacy (SEL) flourished and there was no hiding. In 1997 Claude Steiner presented one of the first definitions of SEL (Steiner, 1997). He eloquently explained that it was to be emotionally ‘in-tune’ with what’s happening around you, and to be able to handle one’s emotions in a way that improves the quality of one’s own life and those with you. A host of others, including Daniel Goleman and Martin Seligman also contributed and it became patently obvious that teaching had changed forever. Yet not all educators could embrace this holistic focus on children. It was an uneasy fit for those who’d not experienced it in their formative years or have worked in a space where it had long been absent. How we related to students, and our likeability, became critical. We watched teachers who couldn’t lock in this critical piece of the puzzle, they struggled for a while, and began to leave the profession.

Today, this new social and emotional approach with young and older students in schools is here to stay. The approach is often badged under; ‘Positive Education’, ‘Positive Psychology’, ‘Positive Behaviour Support’ and ‘Social and Emotional Literacy.’  I call it an attitude where we use our “soft eyes and warm hearts”. This technique safeguards a young person’s emerging spirit because we separate their behaviour from who they are, and who they can be in the future.  When things go wrong, we’re able to maintain a precious space where a young person has the best chance to own their behaviour.  We free them from shame, allow them to retain their dignity, and leave them in a malleable position where they are more likely to feel a little regret and might want to make changes, rather than being forced to. On the flip side, when we push young people too far, too fast with scathing words and harsh actions they bunker down in self-protection mode. Their thoughts switch solely to us; our tough actions and how unjust we were. They lose sight of their responsibility and what they might do to repair the situation.

TEACHING VALUES of BEING HUMAN is an invitation to coach you to do just this. To change gears, and feel affection for a child, especially when they are being stubborn, argumentative, even oppositional.  This is what they need if we want to create trust and loyalty in our relationship. It is a call for us to be at our most respectful when, sometimes, they are at their least.

TEACHING VALUES of BEING HUMAN also reminds us of the natural order of life. We are the adults, and our students are children. Their brains, bodies, and spirit are in the process of precious construction. Now it has become our time to teach the exquisiteness of being human to them.  To immerse them into our greatest assets as a species: kindness, perseverance, optimism, integrity, humility, empathy, personal responsibility, teamwork, creativity, innovation and so much more. To explain they are beautifully unique and worth your every effort. That the atoms which merged to make them who they are, did so like never before, and will never do so again. There will never be another of them anywhere in the universe. They are a matchless creation on this fabulous blue planet. Yes, there will be all kinds of challenges ahead; from global warming, food, water and national insecurities, to the consequences of pandemics, the unaffordability of housing and glaring social inequities. Our mission is to support them to find their goodness, their happiness within, to feel loved, to be kind to others, and be especially gentle on themselves. We want them to rejoice in their humanness. They are so much more than enough!

If we are to shift patterns of behaviour, positively, from one generation of educators to the next it takes honesty, collegiality, reflection, and practice. 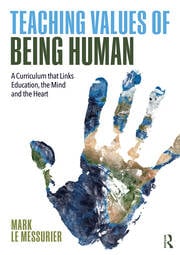