Written by Stephen J. Wayne, author of the forthcoming book The Biden Presidency.

Politics never ends, even after an election. It affects the transfer of power, more so now than the two previous elections. The Biden transition initially faced the politics of obstruction. President Trump’s refusal to acknowledge defeat and implement the Transition Act of 1963 prevented meetings between the president-elect’s transition teams and government officials for almost three weeks. Biden tried to offset Trump’s delaying tactics in three ways; he began transition planning well before election day; he consulted with policy experts outside government even before his aides were allowed to meet with their executive branch counterparts in the Trump administration; and he asked political and private sector leaders, both Republicans and Democrats, to pressure the president to reverse his opposition on the grounds that the absence of briefings by the government endangered the welfare and safety of the country.

Biden transition planners set up 40 separate teams, composed primarily of volunteers and interacting primarily by Zoom. Their job was to examine current issues facing the administration, particularly agency personnel and budget problems, and advise the president-elect on candidates to fill top executive branch positions. Political appointments generate internal party politics between groups eager to maintain their visibility and extend their influence in the new administration.

When selecting his team, Biden also had to consider confirmation politics since more than 1,100 nominees required Senate consent. At the time he announced the selection of most of his senior staff and Cabinet heads, the president-elect did not know which party would control the Senate.

When he did, he anticipated that Democratic control of the Senate would facilitate confirmation, making it easier and quicker for him to get his team in place and start pursuing his policy priorities. As a former Senator and Vice President, he also knew that partisan control would allow his party leaders in the upper chamber to use the reconciliation process on spending, revenue, and federal debt matters and avoid filibusters, which require 60 votes to terminate. Partisan control, however, would also increase expectations on the new administration, but not decrease opposition within and between the parties. Progressive Democrats would push harder for their liberal policy agenda, which, in turn, would evoke more opposition from conservative Republicans. The news media would highlight these controversies in stories that placed the president and his administration in the center of a political storm.

Then another unexpected hurdle, certification politics, occurred, heightening the partisan political environment even further. Trump had urged his most ardent congressional advocates to challenge the Electoral College results in states that Trump lost by a close popular vote. According to the United States Constitution, the states are given responsibility to conduct federal elections. Their certification of their electoral vote is the final step in the presidential electoral process. That certification can be challenged, but only if state or federal laws have been violated. Trump’s supporters alleged such violations, but both state and federal courts rejected their claims. Trump continued to pressure state Republican officials to alter the count and find more Trump votes, enough to change the outcome.

Still contending that he won, Trump used social media to energize his supporters at a Save America rally on the day that Congress convened to officially count the electoral votes and announce the winner. Thousands gathered on the mall. After fiery speeches by the president and his surrogates, protestors moved to Capitol Hill, invaded the U.S. Capitol with Congress still in session., damaged and desecrated the building that Americans regard as the sanctuary of American democracy, and forced members and their staffs to move from the House chamber to more secure places and under police guard. It took almost 5 hours to restore order and allow Congress to resume its work.

The riot and its after-effects affected the transfer of power, but not the election results. Democrats and some Republicans wanted the president to leave office immediately, hopefully by resigning, but if not, by invoking the 25th Amendment, or if necessary by impeaching him a second time. With 11 days remaining before Inauguration Day, two Cabinet members resigning in protest over the events, and the Vice President reluctant to invoke the Amendment’s removal process, furious House Democrats urged impeachment. Biden opposed it, fearing that it might fail in the Senate, delay the  confirmation of his appointees, divert attention from his presidency, and inflame partisanship in both Houses of Congress. He wanted to end the country’s deep political divisions, promote bipartisan consideration of legislation, and proceed on his policy agenda. The last thing he wanted to do was to reenergize Trump’s popular base. A related concern was that infighting within the Republican Party would divert attention when his presidency needed it most, during his first 100 days in office.

The political environment was on fire when Biden was inaugurated on January 20th. My book, The Biden Presidency, discusses these political controversies and those that followed, how the Biden administration coped with internal and external political divisions, and how those divisions affected the president’s quest to govern, to change  public policy, and unify and uplift a diverse and disillusioned country. 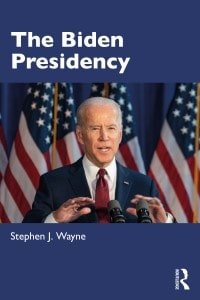 The Biden Presidency by Stephen J. Wayne is set to be published in April 2022. This book is among the first serious looks at the first year of the Biden administration and its many challenges. Intended to introduce students of American government to the person (Biden) and the institution (Presidency) within a particular system (separation of powers), this book will appeal broadly to citizens, media, and general interest readers in the US and abroad.

To browse all our upcoming textbooks in this subject area, please visit our Politics and International Relations collection.

Stephen J. Wayne (BA—University of Rochester, MA, PhD—Columbia University) is a well-known author and lecturer on the American presidency and electoral politics. A Professor of Government Emeritus at Georgetown University, he has also taught at the United States Naval Postgraduate School, Ohio Wesleyan University, and The George Washington University. A Washington-based "insider" for over 50 years, Wayne is frequently quoted by White House journalists and regularly appears on television and radio news shows. He has written or edited 12 books, published in 31 editions, and written over 100 articles, chapters, and reviews that have appeared in professional journals, scholarly compilations, newspapers, and magazines. His most recent books--Presidential Leadership and The Road to the White House 2020--are both in their eleventh editions.
Professor Wayne lectures widely at home and abroad to international visitors, college students, federal executives, and business leaders. He has testified before Congress on the subject of presidential elections and governance and before Democratic and Republican party advisory committees on the presidential nomination processes. He participated in transition projects for the National Academy of Public Administration and the Presidency Research Group.