Written by Tobin Miller Shearer a history professor and the director of the African-American Studies Program at University of Montana, USA. He is the author of Religion and Social Protest Movements.

In early June 2020, a group of Protestant clergy in Los Angeles organized a protest in response to the murder of George Floyd. They were not the only ones to have done so. In Toledo, Roman Catholic, Jewish, and Islamic leaders all decried Floyd’s murder at the hands of the police. Nearly a year later, religious communities were still speaking to the issue of police reform. In April 2021, the Mennonite denomination, for example, released a curriculum entitled, “Defund the Police? An abolition curriculum.”

In a religiously pluralistic context like the United States, commentary from faith leaders about contemporary events is hardly a new thing. Collar-crested pastors, habit-cowled nuns, bald and berobed monks marching in the streets in support of gun-control or anti-abortion legislation or immigrant rights have been increasingly common features of mass protest.

The question is not whether religious leaders and their followers will participate in social change protest but what happens when they have done so. A brief examination of what has taken place as religious resources like vestments, religious symbols, and spoken and embodied prayer have become more and more a part of social protest movements opens up new pathways to understanding how violence and religion have and continue to interact.

Religious leaders have not always marched in the streets. Consider, for example, the abolitionists. Bent as they were on the immediate and total eradication of slavery, they inserted themselves throughout antebellum society. They knew powerful people: leading abolitionist Lewis Tappan dealt with Secretary of State Daniel Webster; abolitionist writer Oliver Johnson was acquainted with New York Tribune editor Horace Greeley. They were organized: more than two decades before the Civil War a quarter of a million abolitionists had organized more than 1,300 anti-slavery societies. And they were prolific: from their pens poured 4,100 circulars, 7,877 bound volumes, 10,490 prints and 47,250 tracts and pamphlets. Through their combined efforts, they counted more than a half million subscribers to their various newspapers. Although many found their insistence and urgency irksome to the point of exasperation, few could ignore their words, their passion, or their righteous demands.

And all these activities bore the mark of religion. Whether considering the Quaker roots of the earliest abolitionist efforts in the 1740s when Society of Friends traveler John Woolman convinced his co-religionists to stand against slavery in public or the efforts of fiery evangelist Charles Grandison Finney to make Oberlin College into an abolitionist training ground by the 1850s, individuals motivated by their religious convictions populated the abolitionist movement. Although in the process of agitating against slavery some left their religious communities or became deeply disillusioned with the church’s ability to speak against social evils, the vast majority of abolitionists identified themselves as devout Christians. More so than economic, regional, or ethical motivations, religious convictions prompted and maintained abolitionist activity in the pre-Civil War era.

But those faith-based abolitionists seldom took to the streets to voice their protests. It was not they were in any way timid. The Pennsylvanian Quaker ascetic Benjamin Lay, for example, came to Pennsylvania in 1731 at the age of fifty and took the Quaker community by storm. His actions ranged from publicly smashing teacups – his wife’s, not his own – in order to protest the use of sugar produced by enslaved Africans to kidnapping a Quaker child so as to force other members of the Society of Friends into empathizing with the grief felt by African families when slave traders kidnapped their children. He disrupted Quaker meetings, made and tailored his own clothes so as to not participate in slave-based textile industry, and excoriated those who had accommodated themselves to a society founded – and dependent upon – slavery.

But he didn’t march.

For that matter, few did at the time. Protest marches have largely been a thing of cities, edifices, and symbolic sites. The U.S. population only became majority-urban as of 1920. To be certain, Mahatma Gandhi’s 1930 Great Salt March in protest of British control of salt production wound its way through 240 miles of rural communities, but most major protests defined as marches have been in and around large urban centers.

And they have been largely a function of the twentieth century. Not the nineteenth.

In the United States, religious leaders only began to participate in organized social protests like marches and large-scale demonstrations as the events themselves became more common from mid-twentieth century forward. The top ten largest mass protests have all taken place since 1970. That religious leaders would show up at such events is not particularly surprising given the ethical and moral dictates promoted by many of those communities. What is much more interesting is to explore what happens when they do show up.

We can make at least three observations.

First, religious leaders bring attention. In these highly performative and public – and carefully orchestrated – events, religious adherents get to define themselves as members of the religious community. In short, their appearance adds visual interest. The image of stole-draped clergy marching in the streets to call the police to accountability grabs attention. Religious vestments such as clerical collars or skufia – the black pointed, folding hat worn by Eastern Orthodox clergy – as well as religious symbols such as Bibles, siddurim (Jewish prayer books), rosaries, or sacred peace pipes all make for good photos. With strong images comes eager press attention – most often one of the main goals of protest marches in the first place.

The religious leaders who participate in social protest marches not only help attract press coverage, they also lend respectability and gravitas to the proceedings. A participant in the June 2020 clergy-led rally in Los Angeles noted, “Who’s organizing the events may make a difference… These are pastors and they gave this a little more space versus what’s been happening elsewhere.” Prayers offered at the beginning or end of a protest likewise give a different tone, one which indicates that the event cannot simply be discredited as a fringe affair. Clergy make it clear that the community speaks – not just some outside agitators.

But religious respectability has its limits. A third observation is that bringing religious resources to bear on social protest can also increase the likelihood that the police or other spectators will respond violently. My study of the use of religious resources like clerical vestments, public prayer, and kneeling in the streets during U.S. civil rights, South African anti-apartheid, Polish solidarity, U.S. anti-abortion, #noDAPL water protectors, and many other protest movements shows that in many historical instances those who prayed in the midst of marching were more likely to experience violent reprisals than those who did not. While not universally the class, the correlation between violence and the use of religious resources in the midst of social protest is, to say the least, stunning.

As we continue to assess, evaluate and seek to understand how and why social protest movements continue to draw on religious leaders and the resources they bring – whether in response to police abuse or any other social injustice – we need to stay alert for all the dynamics at play. To assume that adding religion into the mix of social protest only serves to calm the waters is to gravely misinterpret the history of how the sacred’s interjection into secular space has actually unfolded. As often as not, it has brought violence with it. 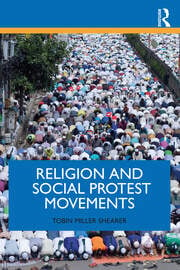 What role has religion played in social protest movements? This important book examines how activists have used religious resources such as liturgy, prayer, song and vestments with a focus on global case. 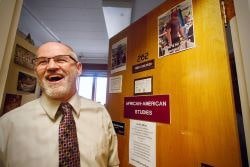 Tobin Miller Shearer is a Professor of History and the Director of African-American Studies at the University of Montana. His new book, Religion and Social Protest Movements will be released by Routledge in June of 2021.