Written by Russ Olwell, author of A Guide to Early College and Dual Enrollment Programs and illustration by Yen Azzaro.

Early college and dual enrollment programs, efforts that focus on helping students attend and finish college earlier and to finish more quickly, have grown in popularity over the past two decades. Once an opportunity reserved only for students identified as gifted and talented, the strategy of letting younger students attend college classes gained momentum in the 2000s, when grant funding from the Bill and Melinda Gates Foundation expanded these efforts across the nation, and focused efforts on low-income and first-generation students.

In my first venture into college access/college success programs, I ran a federally-funded GEAR UP program for 6 years for about 1000 students in Southeast Michigan. We worked with young people starting in 7th grade, and following them into college enrollment. The work with young people was intense, and we tried our best to make a difference in the life chances of our students, whether they wanted to attend a four year college, community college or look for job training.

The results we had working with these students were mixed. As I described in my previous book, Mentoring is a Verb, working with students on academic skills and navigating their life choices can have powerful results, but it is often frustrating, as students may not take your advice, and schools may not be structured to provide the opportunities that the young people need. At the end of the day, our program gave students a sense that college was a possibility, but they had no real experience of success in a college setting.

Early College and Dual Enrollment as an Effective Strategy

As part of a new job in Massachusetts in 2016, I had the opportunity to revisit these issues, and to try a different strategy. My college started an early college program with Lawrence High School, and with an aim of reducing barriers between students and college coursework, and providing enough support for them to complete their first 16 college credits as well as the skills and confidence to move forward.

Part of the impact comes from the combination of challenge and support that early college and dual enrollment programs offer. My talented colleague, Yen Azzaro, created a graphic to represent the full range of activities that a program can offer, that can help a student be truly prepared to start college: 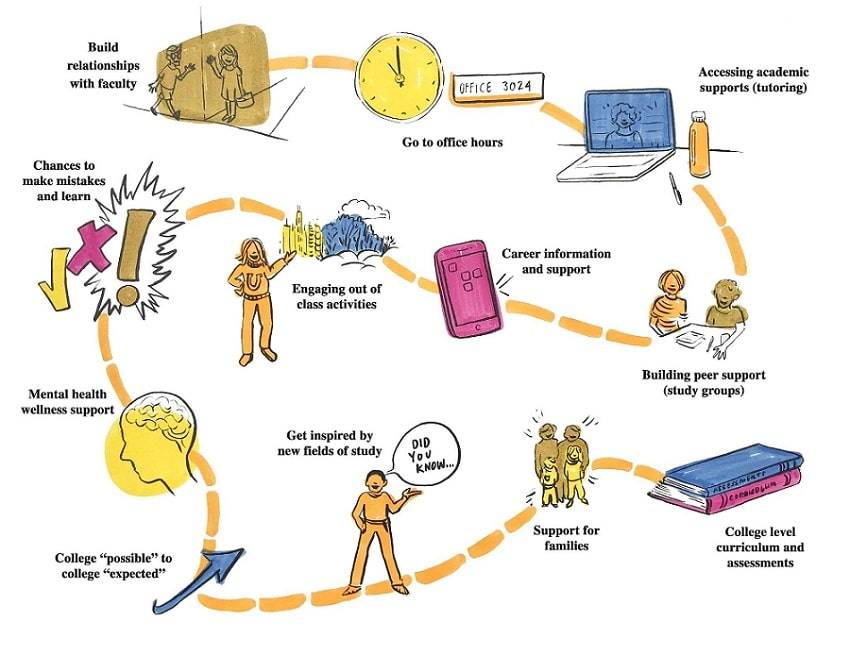 This new strategy bore fruit, with the vast majority of our graduating class moving on to colleges and universities across the country. We also followed up with students, finding that they were successful in their college classes, satisfied with their choice of major, and found ways to be engaged with their campus. When a state study compared these students to a matched-peer group from throughout the state, there was no comparison - the early college students had an achievement level that was much higher, and sustained over time.

However, the statistical data on early college and dual enrollment programs often fail to convince school leaders and policymakers to use this approach, or to scale it up. While early college achievement numbers from North Carolina, Texas, Michigan and Massachusetts have all been positive, the political will to scale the intervention nationwide has never existed.

What statistics often fail to capture about early college and dual enrollment is the human side of the story, particularly the amazing students who participate. In my recent book, A Guide to Early College and Dual Enrollment, I tried to feature as many of these stories as possible, with the hope that putting a name to a statistic might help move this agenda forward, and give more students a chance to experience the benefits of these programs.

Here are just a few:

Paul Akande is one of the first early college students I had ever met. He was part of a pioneering program at Washtenaw Technical Middle College in Ann Arbor, Michigan, then went on to study engineering at the University of Michigan. He was a highly successful STEM student in both high school and college. Since then, he has started to make his career in the energy industry, as well as exploring some of the areas of creativity he moved to the side during his undergraduate experience, including creating his own podcast, Pol and Pals.

Simonai Santiago is a student from Lawrence, Massachusetts who enrolled in the College of the Holy Cross to major in Biology/Health Sciences. Early college gave her the tools to connect with professors, and also to create study groups with her classmates from the first day of class, leading to both solid grades and some friendships, and is off to Washington DC for an internship this fall.

One of the dual enrollment students I taught this Spring, Notre Dame Cristo Rey High School’s Vanessa McKelly, took a human development class after school every Friday. She did so after a day of her work study position (students at NDCRHS are placed with local companies as part of the school’s education model), and also presented at a conference for Massachusetts Teacher Educators about her experiences in the class.

A Call to Action

Dual enrollment and early college programs can make a powerful, long-term difference for students, and they have their strongest positive impacts on students from low-income, first-generation, and minoritized backgrounds. This has been proven through some of the most thoughtful, rigorous and downright clever research ever undertaken, with both randomized control studies and longitudinal studies documenting the benefits.

But early college and dual enrollment, if they are to survive, must grow and spread to areas they have not yet impacted. And reader, that is where you need to take up the issue in your high school, community, or institution of higher education. The close of the pandemic offers school districts and higher education a chance to rethink what they are doing, and dual enrollment early college should be part of that discussion!

A Guide to Early College and Dual Enrollment Programs 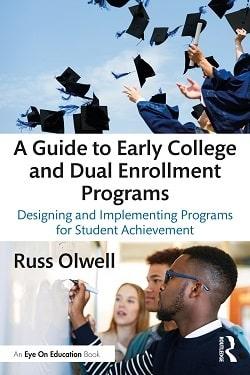 This is an accessible guide for school leaders and educators who seek to build, support, and expand effective early college and dual enrollment programs in their communities. One of the first books to bring together research in a practical way, this book is full of real stories, critical insights from leaders, teachers, and students, examples of what works and doesn’t work, and strategies to help students successfully make an important jump in their lives, putting them on track to post-secondary education and a career.

Russ Olwell is Associate Dean and Professor of Education at Merrimack College, USA. He has spent over a decade running youth mentoring and education programs. 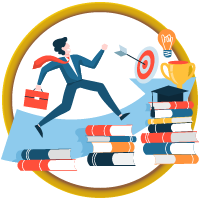