Today, there is potential in medicine to harness “big data,” utilizing the large quantities of information generated daily in various settings. Clinical practice is now shifting from episodic analysis of disparate datasets to algorithms relying on consistently updated datasets for improved prediction of patient outcomes.

The field of radiomics is built on the premise of converting images into data from which useful details may be extracted, for the ultimate purpose of providing medical utility. Image interpretation, especially in the context of subtle disease states, can be limited by various factors, both extrinsic and intrinsic to the radiologist. This article looks at the various processes and subfields, relating to the roles of artificial intelligence in medical imaging.

AI in Healthcare and Extrinsic Factors to Image Interpretation

Diagnostic error accounts for approximately 10% of patient deaths, and between 6 and 17% of adverse events occurring during hospitalization. Errors in diagnosis have been associated with clinical reasoning, including:

These factors, and the limited access to radiologic specialists for up to two-thirds of the world, encourage a more urgent role for the use of AI in medical imaging.

Intrinsic factors can be grouped into three categories: Geometry, Contrast and Background.

Contrast - Examples of high object contrast within the point, line and extended images include a dense microcalcification, tangential pleural calcifications, and calcified granulomas. Fainter microcalcifications, early spicules, and gallstones comprise inherently low contrast point, line, and extended objects, respectively. Note that high object contrast items do not necessarily indicate artificial contrast dye enhancement, though this is a technicality that may vary with the function of other clinical information (renal and liver function, previous allergic responses).

Background - The premise of background implies that the radiologic “canvas” on which a particular target finding appears influences its perceptibility. This background may in turn be influenced by not only the grayscale for which the lesion is displayed, but also the detail of the image itself.  Grayscale components depend on:

These all determine the relative optical densities of the structures under examination. When adding the complexity of anatomic structures in immediate proximity, different levels of attenuation may be seen based on the specific qualities of the medium through which the sound waves, radiation, or magnetic resonance are travelling.  Intuitively, details from the perspective of an observer increase in visibility with proximity to an image. As this distance becomes infinitesimally smaller, the effects of local noise become evident. We see that a significant proportion of the technical factors involved in proper automated interpretation of an image can be overcome with proper allocation of resources to their development. For example, research funds for the role of machine learning in point and line spread function analysis for historically low-resolution imaging, such as radiographs or computed tomography.

Examples of AI in Medical Imaging

The Kohonen self-organized map (KSOM) may be helpful in the understanding of AI’s capacity and potential. It is ideal for utilizing artificial bias and sensory experience to enhance accuracy of Computer-aided detection (CADe) and Computer-aided diagnosis (CADx) when applied to medical imaging. Briefly, it is an artificial neural network (ANN) developed to decrease complexity by representing multidimensional vectors into as little as one dimension. Yet, data is stored in such a way as to maintain topological relationships. The KSOM is a form of unsupervised feature extraction and classification. Unsupervised feature extraction utilizes images and clinical narrative texts to allow for high throughput application in the analysis of clinical data.

The steps in this process include disease detection, lesion segmentation, diagnosis, treatment selection, response assessment via repeat imaging, and using data about a patient to create clinical predictions in regard to potential patient outcomes.

Take your pick from a variety of Healthcare books, where you'll find the latest releases.

IoT in Healthcare and Advances in Remote Patient Monitoring

Free Guide to AI in Healthcare 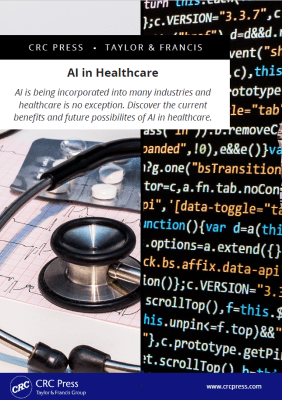