Written by Colin Cooper, Author of Individual Differences and Personality

What sort of person are you? Are you “normal”? The answer you get will probably depend on whether you ask an “individual difference” psychologist or a psychiatrist – although as we will see, these two approaches are sometimes more similar than they appear.

Psychologists now understand rather a lot about personality and mental abilities. For example, some people are more sociable than others. Some are more emotionally stable, conscientious, open to new ideas or better able to understand their own and others’ emotional states. Now we understand the ways in which people vary, most research now focuses on the reasons why these individual differences occur.  For example, are they linked to the way our parents behaved when we were growing up, variations in the ways in which our brains function, genetic makeup, or the influence of people outside our family circle?

All these characteristics (“traits”) have one thing in common.  People vary from one extreme to the other with more people having a “middling” level of a trait than an extreme score.  For example, most people are fairly conscientious; rather few are completely slapdash and rather few are totally obsessive.  This is different from the psychiatric approach which tends to categorise people rather than measuring their level of a trait. Psychiatrists have guidelines to help them decide whether a person is “normal” or “schizophrenic”, for example. Likewise, criminals who commit the most horrible crimes (cannibalism, etc.) may be diagnosed as psychopaths and are (in the United Kingdom) locked up in secure hospitals and viewed as being quite different from the rest of us.

Mental disorders are thus often viewed in much the same way as physical illnesses by psychiatrists. It is as if some pathogen causes a mental disorder to develop, which can (perhaps) be cured using medicine or other therapy. Psychologists such as Gordon Claridge, have questioned whether the distinction between “normal” and “abnormal” behaviour is quite as distinct as psychiatrists may assume.  This “continuity hypothesis” suggests that milder versions of schizophrenia, psychopathy and other disorders may be found in all of us. 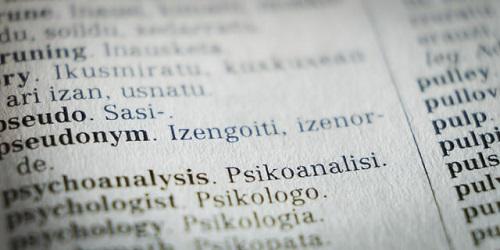 Schizophrenia is typically diagnosed when a person shows disturbances in thought, beliefs, perceptions, emotions or behaviour. For example, a person’s speech may be disorganised; they may invent and use new words, leaving other people baffled as to what they mean, or they may speak fast and incoherently.  They may have unusual beliefs, perhaps thinking that they are controlled by aliens via the television.  They may experience hallucinations - for example, hearing angry voices - show inappropriate emotions, and struggle with daily tasks such as cleaning or cooking. But are these symptoms only found in people diagnosed with schizophrenia, or can milder versions of them (“Schizotypy”) be found in most of us?  And if so, how can we tell whether the mild and full-blown symptoms have the same underlying cause?  Are those given a diagnosis of schizophrenia that different from the rest of us?

Psychologists have developed questionnaires asking about slightly unusual beliefs, behaviours and experiences. They may explore whether a person believes in magic, flying saucers, or ghosts, whether they sometimes have difficulty “thinking straight” or putting thoughts into words so that others can understand them, whether they feel that they are somehow “special”, and whether others sometimes view them as behaving a little eccentrically and impulsively. None of these behaviours are particularly unusual, nor do they indicate a mental disorder; conspiracy theories abound at the moment! Crucially, it has been found that all these characteristics tend to go together; people who believe in magic are more likely than not to think they are “special” and have problems controlling their thoughts etc. In other words, these questions measure a trait. This trait is named schizotypy, because the items resemble very mild versions of the symptoms of schizophrenia.

But how similar are schizotypy and schizophrenia?  Although schizotypy looks like a milder form of schizophrenia, appearances may be deceptive; to tell for sure we need to explore whether the mechanisms which underly schizophrenia resemble those found in schizotypy. For example, relatives of people diagnosed with schizophrenia tend to have above average schizotypy scores, which might suggest that a particular set of genes and/or the family environment may influence both.

Some brain mechanisms also seem similar. When people diagnosed with schizophrenia are asked to watch a smoothly moving dot on a screen, their eyes jump from place to place, rather than tracking it smoothly, for reasons which are well understood. So too do people with high schizotypy scores, once again suggesting that schizophrenia is simply a more extreme version of schizotypy, rather than something qualitatively different.  Another experiment involves asking people to look at the centre of a screen. A dot is then then projected to the left or the right; our natural inclination is to move our eyes to look at it. What happens when we are told to look away from the dot each time it appears? People with schizophrenia find it difficult to do so – as do people with high schizotypy scores. Once again it seems that the brain mechanisms are somewhat similar. Many additional types of research also suggest that rather similar biological and cognitive processes are found in schizophrenia and schizotypy. People diagnosed as “schizophrenic” may not be so different from the rest of us, as we used to think.

We have already mentioned self-centred, callous criminals (usually male) who commit the most horrific crimes and who enjoy manipulating others, feel that society’s rules do not apply to them and who show little emotion or remorse for their horrible crimes.  Psychiatrists may use specialised interviews and other techniques to diagnose them as “psychopaths”. But is it possible that they too are just at the extreme end of some trait which is found in “normal” people? Psychologists have explored the “dark tetrad” of personality – Machiavellianism (manipulating people for one’s own ends), sadism, narcissism (self-importance) and psychopathy (callousness and lack of empathy).  These can all be measured in “normal” people, and tend to go together; someone who is manipulative will also tend to be sadistic, self-important etc. It is again possible to discover whether the brain mechanisms associated with these traits resemble those found in psychopathic criminals. This is still work in progress, but it seems that lack of eye contact, poor emotional processing, variations in the size of a part of the brain known as the amygdala, may be linked both to the dark tetrad and to criminal psychopathy.

There are many ways of discovering how people vary, and not all of them involve studying clinical groups. However, the distinction between “normal” and “abnormal” behaviour may be a little less clear-cut than we generally assume. 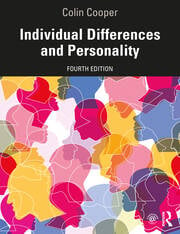 This textbook provides a student-friendly introduction to both classic and cutting-edge research into personality, mood, motivation and intelligence, and their applications in psychology and in fields such as health, education and sporting achievement.

Colin Cooper researched and taught individual differences and psychometrics in the School of Psychology, Queen's University, Belfast for 20 years.  He retired in 2012 and now lives in London Ontario, where he edits journals and write books such as Individual Differences and Personality (4th Edition), Psychological Testing, and Intelligence and Human Abilities, all published by Routledge.  He is president of the International Society for the Study of Individual Differences for 2021-2023.

Aggression in Times of Covid-19

Enjoyed this blog and looking for more social psychology content? Read the latest blog, Aggression in Times of Covid-19: The Social Costs of the Pandemic, from Routledge author Barbara Krahé.