We are delighted to share with you this exclusive interview with Sayyed Mohsen Fatemi, author of The Psychological Power of Language.

Are there any key messages you’d like to highlight?

The book presents a recondite analysis of the psychological power of language in creating and constructing realities. Understanding language and its social, political, cultural and psychological implications would highlight the significance of the use of language in empowering or disempowering human life. Exploring language as a way of living and a mode of being may demonstrate how language may give rise to interpersonal and intra personal emancipation.

What do you hope readers will take away from this book?

Readers would learn how their use of language may have an impact on their identify formation, their life enhancement, their well being and their creativity.

What is the role of language in therapy?

Language may serve as a panacea in the psychotherapeutic relationship. If used mindfully and wisely, it can give rise to illumination, enlightenment, hope, composure, tranquility, attunement, intersubjectivity, and empathy. The wellbeing and wellness of the therapeutic relationship can be strengthened through the mindful, artistic and meticulous use of language. A mindful oriented language can expand horizons of possibilities for the clients.

You have a new book coming up with Routledge “ Film Therapy” how do you see the psychological role of language in films?

Films are replete with meanings and messages which unfold their power and effects through language in its broadest sense. Films may provide us with an expansive mode of language use in verbal, vocal and visual formats. The change and shift in any of these components may attenuate, amplify, diminish, maximize or minimize meanings, allusions, contents and forms. A holistic perspective towards language and its implications in a film may demonstrate the psychological influence of language in persuasiveness, motivation, attitudinal change, education, decision making, coercion, and emotional changes. This book will portray the power and the potential of film in therapeutic contexts: Films can serve as therapeutic means.

Can we see the horizon of creating a universal language based on your psychological analysis of language? What are the implications of such a language?

Yes, language can obstruct and hamper the process of peace as it can also do the opposite and create tension and tremor. People, albeit different in their languages, can come to realize that they may share common points that would build rapport, understanding, compassion and synergy. This can be done through a psychological project where people can discern the pearl of peace through oneness and togetherness.

This does not nullify nor discredit the multiplicities of perspectives in connection with different inner and outer languages but it ascertain that deep down the underlying components of human interactions, there lies the possibility of shared values and shared dreams that may espouse the fervor towards celebrating a discourse of togetherness. This sense of unity may allow them to experience the propensity of crying together and laughing together at the apex of wholeness and togetherness.

Can you sum up the book in one sentence?

A change in language would give rise to a change in one's way of living. 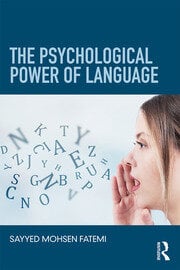 Dr. Sayyed Mohsen Fatemi completed his postdoctoral studies in the department of psychology at Harvard University where he has also served as a Teaching Fellow, an Associate and a Fellow. He is a frequently published author and has been the keynote speaker of numerous international conferences.

His publications appear in Springer, Wiley, Templeton, Cambridge University Press and Oxford University Press and Journals such as APA's Journal of Theoretical and Philosophical Psychology. His new book on psychology of language came out in August 2018 by Routledge Publication in New York and he has also new publications coming up with Lexington, American Psychiatric Association and Macmillan Palgrave in 2018, as well as new book called Film Therapy under contract with Routledge.

In addition to teaching at Harvard, he has also taught for the department of psychology at the University of British Columbia, Western Washington University, University of Massachusetts in Boston and University of Toronto.