CRC Press is pleased to share with you our author Q&A session with Dr. Amit Kessel and Professor Nir Ben-Tal, authors of Introduction to Proteins: Structure, Function, and Motion, Second Edition 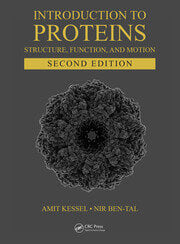 Congratulations on the publication of your book Introduction to Proteins, Structure, Function, 2nd Ed.. What would you like your audience to take away from the book?
Amit - Thank you. I have two hopes for the book. First, I hope that it allows people without specific background in life sciences to get acquainted with the highly diverse world of proteins and to realize how important these molecules are to our lives, as well as to all other biological life forms. Non-scientists usually think of proteins in terms of nutrition, exercise, and fitness. While proteins are indeed related to these topics, they are so much more than that. Proteins are both the main material that constructs our bodies and the machines that make us work, from the molecular level to the physiological one. It is therefore not surprising that most known diseases result, directly or indirectly, from errors in proteins, and that most pharmaceutical drugs, as well as toxins, target proteins. In addition, the ability of many proteins to accelerate chemical reactions in a highly efficient and specific way makes them attractive catalysts widely used in different industries. My second hope for the book is that it provides students and scientists in the fields of biology, chemistry, physics, and medicine, a thorough understanding of protein structure and function. Particularly, I hope that the book is able to convey the mechanistic intricacy of proteins, honed by billions of years of evolution, as well as the physical basis of this intricacy at the molecular level. Gaining such a comprehensive understanding is highly challenging but, on the other hand, makes protein science so interesting.

Nir - Very exciting indeed. Thank you. In the book, Amit and I strive to introduce general guidelines for thinking about protein structure and function based on energy considerations on the one hand, and evolution on the other hand. I very much hope that we were able to clearly introduce these concepts and provide an informative and interesting overview for both life science professionals and the general audience.
What inspired you to write this book?

Amit - My main inspiration was the academic courses I taught and the students who took part in them. I have been teaching protein science and biochemistry for over 15 years, and I always felt that the existing textbooks, while very professional, did not cover all the topics encountered in class. I’ve noticed that biochemistry textbooks usually provide a general view on protein function and overall architecture, but offer very few insights on mechanistic aspects. Other textbooks, which focus on protein structure, tend to neglect the functional aspects, as well as the many medical, pharmaceutical, and industrial applications of proteins. Finally, almost all available textbooks ignore the physics and chemistry underlying both protein structure and function, and the important dependence of protein function on its dynamics. Therefore, Nir Ben-Tal and I decided to try and write a book that encompasses all of these topics, while also referring to real-life aspects related to proteins, such as diseases, drugs, chemical warfare, and even historic events. We believe that this book will provide our students with a wider, more complete view of proteins, and demonstrate the many ways they would be able, as the future generation of scientists, to integrate protein science in academic and industrial research. Another inspiration for writing the book came from my own research. Both Nir Ben-Tal and myself use computational methods to study different aspects of proteins, including structure, function, and evolution. Again, most available textbooks on proteins tend to describe experimental (lab) methods employed by biochemists and biophysicists, like X-ray crystallography and NMR spectroscopy, while ignoring computational methods. In our book, Nir and I tried to provide a more balanced description of the methods, encompassing both experimental and computational approaches.

What did you enjoy about writing the book?
Nir - During our daily scientific work, we mostly focus on very specific research questions. Writing the book has been an excellent opportunity to catch up on many broader aspects of protein research. But what I enjoyed most was the thought/hope that readers, mostly young scientists, would view proteins the way Amit and I do. I also hope that with the electronic version, the book would be readily accessible in the less wealthy regions of the world as well.
What audience did you have in mind whilst writing your book?
Amit - Textbooks on protein structure and function usually target audiences from various life science fields, mainly biochemistry, biotechnology, structural biology, and bioinformatics. Our book targets these audiences too, but since it also addresses chemical and physical mechanisms, as well as medical, pharmaceutical, and industrial aspects of proteins, we believe it will be similarly interesting also for chemists, physicists, biophysicists, chemical engineers, and audiences from the medical and para-medical fields. In addition, the overview of computational methods and approaches for studying proteins should make the book interesting also for audiences from the computer science field.

Nir - As a scientist, I am used to writing to experts in my own field of research, computational structural biology. However, I tried to make the book accessible to the fresh minds of undergraduate students. I have been using the book to teach the proteins chapter in an elective course, “Introduction to structural biology”, given to undergraduate and graduate students. Feedback about the first edition indicates that other teachers have used the book in similar courses. In the second edition, Amit and I tried to make the book suitable also for the protein chapters of the undergraduate core Biochemistry course. For example, we added a new chapter on enzyme catalysis. I very much hope that we succeeded in making these intriguing topics accessible to the next generation of scientists.
What is your academic background?
Amit - I started my training as an experimental scientist and did my Masters’ degree in biochemistry, at Tel-Aviv University, studying mechanisms used by white blood cells to kill invading bacteria. This research was quite challenging because the key enzyme employed by the cells is very complicated; it includes many different parts that are kept separate in the cell during rest and assemble into an active complex only when the cell is activated following the recognition of bacterial cells. When this happens, the active enzyme produces bacteria-killing chemicals, one of which is the active ingredient of bleach. Analysing the intricate mechanism of this enzyme made me appreciate the high dependence of molecular machineries on thermodynamic and physical phenomena (e.g. electrostatic interactions), which are usually ignored in our everyday life. These phenomena are difficult to study in the lab but can sometimes be elucidated using computational methods that calculate them individually. To study these topics in-depth, I decided to switch focus and did my Ph.D. in computational structural biology, at Nir Ben-Tal’s lab, Tel-Aviv University. Specifically, I used computational methods for calculating the binding free energies of peptides and proteins to model membranes, thereby characterizing the dominant physical interactions in such events. Later, during my post-doctoral training at Barry Honig’s lab (Columbia University, NY), I used similar approaches to study the binding between proteins. After finishing my studies, I spent a few years teaching college biochemistry and protein science, as well as co-writing the first edition of this book together with Nir Ben-Tal. At the same time, I explored more practical venues of scientific research following the realization that, due to their proficiency and selectivity, enzyme catalysts are sought-for by different industries, including the pharmaceutical industry. For more than a century, pharmaceuticals have been produced by chemical processes that are both expensive and pollutive, mostly because of the use of heavy metals as catalysts. In contrast, enzymes are natural eco-friendly catalysts and therefore constitute a good alternative to heavy metals. Moreover, the high specificity of enzymes prevents side-reactions, which reduces the production costs. One of the major problems in using enzymes for producing industrial chemicals was that enzymes have been designed by 4 billion years of evolution to operate on naturally-occurring chemicals, not artificial ones (such as those used in pharmaceuticals). This problem can be solved by genetically engineering natural enzymes to recognize artificial chemicals, although this task is highly challenging considering the intricacy of enzymes. To address this challenge, I co-founded ‘ES-IS Technologies’, a startup company that designed enzymes for the pharmaceutical industry. In my company I used computational methods to predict which parts of the enzymes should be engineered to change their specificity, and which mutations should be introduced. I used a rational approach that focused on the calculation of the physical interactions between the enzymes (both natural and engineered) and the chemicals they operated on. Although current engineering methods are different, relying mostly on empirical lab experiments, the work we did was exciting and provided important insights into proteins in general and enzymes specifically. Later, when Nir and I wrote the second edition of this book, I used many of these insights in the new chapter focusing specifically on enzymes (ch. 9).

Nir - I did my undergraduate studies in Biology, Chemistry and Physics (at the Hebrew University of Jerusalem, Israel), and my graduate studies in Theoretical Chemistry (at the Technion, Haifa, Israel). My PhD research focused on very abstract topics like quantum dynamics and quantum chaos. It was very interesting at the time, but I felt that biology has more to offer, and shifted to biophysical chemistry during my post-doctoral training (at Columbia University, NY), where I studied peptide-membrane interactions. Starting my own lab at Tel Aviv University, I slowly drifted from peptides to whole proteins, initially membrane proteins and later also water-soluble proteins. My current research includes both detailed studies of specific proteins (e.g., various sodium-proton exchangers), as well as evolutionary relationships throughout protein space, where the ultimate aim is to understand how proteins emerged and evolved. In addition, I am involved in several drug discovery projects with specific protein targets.
Do you have plans for future books? What’s next in the pipeline for you?
Nir - Amit and I plan to write about the emergence of proteins during evolution. From our current evolutionary standpoint, it is difficult to imagine disentangling proteins and nucleic acids (nucleotides, RNA and DNA). For example, the information required to synthesize protein is encoded in the DNA, but proteins are needed in order to execute these codes. However, on early Earth, this “chicken or the egg” question must have had a solution, providing an intriguing enigma to contemporary scientists. These complex processes also require energy, the primordial source of which is not clearly known.  Writing about these topics is much more challenging, because there are more questions than answers, including the climate conditions on Earth during the early development of life. We aim to introduce various theories about the emergence of proteins and correlate each of them with the available data.
What is the last book you read (non-academic)?
Nir - I hardly read non-academic books, but these days I am reading a documentary novel called Home (Habaita in Hebrew), by Assaf Inbari, describing how a group of crazy young socialist-Zionists (mostly from Russia) established Kibbutz Afikim near the Sea of Galilee. Beyond the amazing stories of survival in hostile land, in hot climate and in a new culture, their naïve struggle to form a new society where all are equal is inspiring, funny and emotionally moving.