Statistician of the Month - July:David Salsburg

Congratulations to David Salsburg, being named as CRC Press's Statistician of the month for July 2018!

CRC Press is pleased to share with you our author Q&A session with David Salsburg, author of Errors, Blunders, and Lies: How to Tell the Difference.

David Salsburg is the author of The Lady Tasting Tea: How Statistics Revolutionized Science in the Twentieth Century, a popular science book he wrote in retirement. It has appeared in hardcover and paperback, in Chinese, Korean, Japanese, and Portuguese editions. The paperback version is now in its eleventh printing. Since retiring in 1995, Salsburg has also taught at the Harvard School of Public Health and taught his last course at Yale University in Fall 2016. He continues to publish academic articles. David has recently published his new title Errors, Blunders, and Lies: How to Tell the Difference, the first book in a joint series wth CRC Press and the American Statistical Association, ASA-CRC Series on Statistical Reasoning in Science and Society. Read more...

Click here to download a free chapter of Errors, Blunders, and Lies: How to Tell the Difference 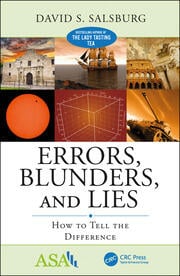 Congratulations on the publication of your book Errors, Blunders, and Lies: How to Tell the Difference. What do you want your audience to take away from the book?
As described in the preface, I wanted to show how exciting it is to delve into what John Tukey called “other people’s back yards.”  I presented a collection of statistical regression models, avoiding any reference to hypothesis testing or p-values. This approach gets the reader right into the “mud” of someone’s back yard.  I think that, by opening the book with the transit of Venus in the 18th Century, I bring the reader immediately into a real scientific problem.

What inspired you to write this book?
I was invited to present something to a high school AP statistics class, while visiting family in Georgia, and I thought that the transit of Venus would show them a well defined real problem—a characteristic of statistics that is often missed in the standard presentation.  The talk was never given, since a terrible ice storm closed the entire school system  for three days, and we flew home.  However, as I worked on the talk, I realized that the transit of Venus was a perfect introduction to a three-fold approach to statistical problems.

What audience did you have in mind whilst writing your book?
The idea originated in a talk designed for high school students, but I think the book should have wider appeal.  It will provide a look at specific problems that were solved with statistical models, written so that a non-mathematical reader can understand and enjoy the examples.  It fits very well into the intent of the ASA/CRC editors to create a series of elementary books on the role of statistics in science and society.

What makes your book stand out from its competitors?
Although there are many popular science books explaining statistical models, I think this is the only one that looks at statistical models in terms of errors (the random element in all observations), blunders (data that come from a different distribution),and lies (faked data).

Is there one piece of research included in the book which surprised you or challenged your previous understanding of the topic?
One of the chapters is based on an article I wrote for the journal, Chance.  When I first began looking at the counts of fighters recorded in the Biblical Book of Numbers, I expected I’d find fairly strong evidence of faked data.   However, it turned out that, when you leave off the hundreds digits, the counts of “thousands” are well within what would be expected from a uniform distribution.  This, in turn, led me into an investigation of the meaning of the Hebrew word “elef”, which we now translate as 1000, but which had a more vague meaning in Biblical times.

What did you enjoy about writing the book?
I needed examples that were striking enough in terms of subject matter and yet whose statistical model was simple enough to explain.  This sent me to application articles in journals, advanced and elementary text books, and academic books aimed at a small subset of scholars with both subject matter knowledge and mathematical sophistication.  I had far too many “back yards” to fit into a book that had to be no more than 150 pages.  But, it has made me something like Mr. Dooley’s savant, who “could talk about any subject under the sun in front of them what knows nothing about it.”

Tell us about your previous publication, The Lady Tasting Tea?
The Lady Tasting Tea, which first appeared in 2002, described the motivations behind the development of statistical methods in terms of the men and women who were involved. One of the complaints about it in the reviews was that it did not have enough (or any) mathematics, so, as one reviewer put it, “the book becomes a series a chapters that say, So-and-So had a problem.  He solved it with statistics, but you wouldn’t understand, so let’s move on.”  My wife, Fran, had asked me to write down many of the human interest stories of people I knew or knew about.  This developed into the Lady Tasting Tea, designed to introduce non-statisticians to the excitement and disputes involved in statistical research.  Errors, Blunders, and Lies goes a step further and introduces the reader to some simple algebraic expressions that describe the basic ideas.

What first attracted you to this topic as an area of study?
I came into statistics with a strong mathematical background, where I had fallen in love with measure theory and integration over the complex plain.  But, I always had an interest in applications.  So, I was able to marry the two in the study of mathematical statistics.

Tell us an unusual fact about yourself and your teaching or writing style?
I am a lover of classical music (especially Romantic symphonies) and poetry, and I’ve written my wife, Fran, over 2000 love sonnets during our 58 years of marriage.

What is the last book you read (non-academic)?
First Women by Kate Anderson Brower.

David Grubbs has been at CRC Press for 16 years and commissions books in all areas of statistics and data science including but not limited to statistical theory and methods, biostatistics, pharmaceutical statistics, statistical and machine learning, statistical software, computational and applied statistics, books in R and Python, environmental statistics, data analytics and Bayesian statistics.

The Errors, Blunders, and Lies: How to Tell the Difference has recieved great reviews:

"…so compelling that I read it in one sitting." –Ann Cannon, Cornell College

"Salsburg covers a wide range of subtle issues in statistical modelling, made easily digestible through a delightful collection of historical stories. These show the true power of statistics: from determining the risks of heart attacks for the inhabitants of Framingham, to checking how many books were written by Davy Crockett." –David Spiegelhalter, University of Cambridge

“This is a delightful read that takes us through a gentle tour of statistical concepts in non-technical language. Readers with prior exposure will enjoy the lively historical context that is usually not provided in other introductions. Dr. Salsburg offers a broad audience an accessible way to understand the most important topics in statistics." –Jeff Gill,Professor, Washington University

"Salsburg's book, Errors, Blunders and Lies: How to Tell the Difference, is a timely examination of how statistics and statistical modeling has assisted humankind in better understanding the world about us, whether the context is in, for example, the physical sciences, medicine and health, politics, or environmental science. The author clearly explains important statistical procedures, but does so while providing an historical overview of the role that statistics has taken in minimizing errors in testing and thinking in general. This book is a pleasure to read, but difficult to put down once started."

"Exceptionally informative, inherently fascinating, thoughtful and thought-provoking, Errors, Blunders, and Lies: How to Tell the Difference is a unique and extraordinary read from beginning to end. Remarkably well written and thoroughly 'reader friendly' in organization and presentation, Errors, Blunders, and Lies is an especially recommended addition to both community and academic library Statistics & Statistical Interpretation collections and supplemental studies reading lists. It should be noted: for students and non-specialist general readers with an interest in the subject, that Errors, Blunders, and Lies is also available in a paperback edition." –Michah Andrew, Michah's Bookshelf